The seminal sextet — which actually tours as a quintet, with co-founding guitarist and songwriter Brett Gurewitz opting to stick around the offices of the successful Epitaph and Anti record labels he owns and operates — is back with its 16th album, True North, a collection of 16 meticulously-built punk anthems brandishing firepower, intellect and constructive social criticism.

But what’s important to singer, songwriter and co-founder Greg Graffin is not that they’ve survived, but flourished, while continually raising their own artistic standards. 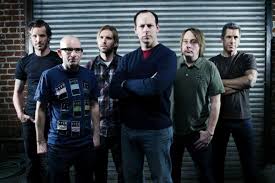 “Now I really shoot for trying to make a better record than the one before,” said Graffin ahead of the band’s Kool Haus gig on Sunday.
“What’s most satisfying is still being able to put out an album that I consider good, one that I want to go out and play for the world, and that’s a rare thing for a band that’s 33 years old.”

Looking every bit the middle-aged Cornell University professor and author (Anarchy Evolution with Steve Olson) he is in a white shirt and slacks as he sits in the lounge of the Westin Harbour Castle, Graffin says he’s proud that Bad Religion is still relevant.

“I was 16 years old when we made our first album,” says Graffin, nursing a tall coffee. “And I, like all the other guys, thought that this is a great creative outlet for our youth. At that age, you don’t even think about getting older.
“Luckily, the topical material that we chose — me and my co-songwriter Brett Gurewitz have always been nerdy, intellectual types who like philosophy and science — somehow we seized on those as metaphors in our early material.
“A lot of stuff that we did when we were 16 is embarrassing. But some of the real classic songs that we wrote back then, I still stand by. Because we chose those kinds of metaphors, we’re fortunate that we can still talk about some of those things.”

Bad Religion’s evolution hasn’t been without its struggles — only Graffin has remained a constant since the band formed in 1979, with both Gurewitz and co-founding bass player Jay Bentley departing and eventually returning. They’ve enjoyed some mainstream radio success; made the jump to the corporate major (1994’s Stranger Than Fiction for Atlantic even earned them a gold record) before returning to independent stature, and won audiences around the world with their consistently entertaining and energetic shows.

“We’re playing in places that the Sex Pistols never could have dreamed, or The Ramones,” asserts Graffin, 48. “Two years ago we were asked to play Jakarta, Indonesia and it was this huge outpouring of love for Bad Religion. I couldn’t believe it.”

Even True North is a testament to the band’s still-growing popularity. Upon its release, the album made top 20 debuts on both Canadian and U.S. sales charts, a first.

“On this album, we said, ‘Let’s try to write some concise two-minute songs like we did in the old days and let’s give ourselves a cap. Let’s just say — two minutes or below — and see what we come up with,’” Graffin recalls.
“I welcomed the challenge because it put me back in a style of writing where you have to say a little bit more in that shorter amount of time.”

He says the title track is about determining your own path.

“A lot of the songs on here I wrote from the perspective of a kid who’s running away,” Graffin explains. “The song ‘True North’ uses a map as a metaphor saying that when we’re young, your parents sort of provide you with this map, and there’s open-ended routes you can take, but you better damn well follow the map. And the song ‘True North” is saying, ‘What’s in this map for me? There’s nothing here for me. This is your template.’
“In order to find true happiness in life, I believe every one of us, no matter what age, has to find their own sense of direction.”

Graffin has certainly found his, although he admits Bad Religion isn’t the be-all-and-end-all of his existence.

“I look at the band as a creative outlet, but none of the guys in the band ever wanted it to be our entire life,” concedes Graffin.
“We never wanted the band to consume us, but we were all sure about one thing: when we wrote our earlier material, even as kids, we wanted it to have some substance to it. We wanted it to be a way of distilling what we saw in the world into creative two-minute sound bytes.
“If you want to do that in an entertaining way, especially as you get older and put out more albums, you’ve gotta have some kind of philosophical foundation upon which you’re resting and continually refine. I would say we continually refine it based on the idea that knowledge is a good thing and we favour science as a way to find truth in this world.
“You mix that with the emotional connections in songs — I think that’s the heart talking — and I think you have pretty interesting formula for songwriting.”