Oakville’s Allie Hughes built considerable buzz during her formative years in Toronto, as a must-see act who balanced performance art and theatrical sensibilities with a knack for infectious, melodic pop.

But it wasn’t until Hughes left for Los Angeles and transformed herself into Allie X that her career truly took off. Since 2014, she’s issued the EP CollXtion 1– most prominently remembered for the song “Catch,” with its hip, stylish video, and for earning sumptuous praise from Katy Perry. Her new album CollXtion II is as beguiling a collection of synth-pop perfection as you’ll find this side of Ellie Goulding.

The buzz is still out there, but it’s now global. “It really wasn’t working in Toronto, partly because I didn’t have my sound figured out,” says X over lunch at Toronto’s Royal York Hotel, her waist-length brunette mane draped over her shoulders as she tucks into a plate of scrambled eggs with thick slices of avocado on the side. 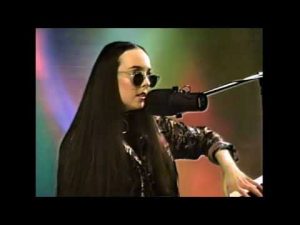 “I was friends with a lot of indie, experimental rock/electronic musicians, really talented folks, and I was always really inspired. What I didn’t really realize is that I was making pop music. I thought that I was sort of in the ‘these are all my cool friends’ camp, and I was trying to do something in that niche. I was always listening to artists on Pitchfork. I was friends with Born Ruffians, Tokyo Police Club, Broken Social Scene. But with the music I was making, nothing was happening. And what I sort of realized after awhile was, ‘You’re making pop music. Why don’t you just go for it?’”

X, who was part of the inaugural Slaight Family Music Centre residency at The Canadian Film Centre in 2012, used the connections she made there to finance a ticket to L.A. After meeting with such prolific score maestros as Academy Award winner Mychael Danna and “a bunch of his friends who are successful composers,” Allie X got permission to extend her stay for a week and set about hustling meetings. Eventually, she signed a publishing deal with Prescription Songs, overseen by Grammy-nominated and JUNO-winning producer, professional songwriter, and SOCAN member Henry “Cirkut” Walter (who co-wrote and co-produced eight songs on The Weeknd’s Starboy album, and with/for Britney Spears, Rihanna, Katy Perry, Nicki Minaj, One Direction, Kesha and Miley Cyrus, among others).

“When I got there, all of a sudden stuff just started working,” recalls Allie X, who has placed a song in the upcoming film Sierra Burgess is A Loser. “I was being put into rooms with the right people for the kind of music I was writing.”

“Music’s been the thing that has given me a voice… I don’t know where I’d be without music.”

What does the “X” in Allie X signify?
“X equals the possibility of anything. It also represents anonymity. So for me, adopting the ‘X’ into my name was about wiping the slate clean and defining my own truth from scratch. It gives you permission to be in-between and figure things out.” 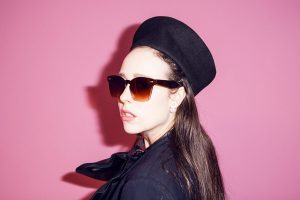 Hughes also signed to former Sony executive Nick Gatfield’s Twin Music label in time for CollXtion II, but before she finished the album, she worked with gay YouTube icon Troye Sivan on his first album Blue Neighbourhood, placing five co-writes on the project, including his breakthrough Top 30 Billboard hit, “Youth” (which has to date earned more than 75 million YouTube views).

“That was so positive; I made some money,” laughs X. “Troy’s, like, a really cool guy.  Out of all these young artists I’ve worked with in L.A., he has the most artistry behind what he’s doing. He’s so specific about what he wants. And we weren’t approaching those sessions from a radio-single perspective. It was more like, ‘Let’s just hang out and write about your life and how we relate to it.’ It was super-positive and then it did so well. We’re working on new stuff for him right now.”

X is looking to repeat the Sivan success story with her own album, especially now that she’s settled on a synth-heavy sound. She first started on piano when she was a child. “My grandparents gave us a piano and my Mom was, like, ‘Now you have to take piano lessons,’” says X, who’s gifted with long, slender fingers. Initially, she resisted because she wanted only to sing instead. “And much to my surprise – and I was a stubborn kid, always trying to prove that I was right – I loved piano. And I continued to play, all the way from Grade 4, when I started, to the end of high school.

“It’s kind of my instrument, one that I know my way around,” X continues. “In my mid-20s, I got into synthesis, and started playing around on the Juno and the Prophet keyboards, and learned about frequency and all the different effects. I got really into that… That’s when I really started to find my sound. And also when I started to learn Ableton [production software] and learn how to produce. That was the turning point, where the sound we now hear for Allie X started to come.”

The 10 songs on CollXtion II are all co-writes, as X teamed up with Brett McLaughlin, a.k.a. Leland (Capital Cities, Hilary Duff), Mathieu Jomphe Lépine, a.k.a. Billboard, and a host of other individuals.  The songs that comprise the album – “Paper Love,” with its catchy whistle motif; “That’s So Us,” with its chugging synth-bass line: and “Lifted,” with its reggae feel, to name a few – demonstrate a sturdy sonic architecture that reveals more depth with each listen.

It’s a signature sound that’s earned Allie X more than 12 million streams of eight songs on Spotify alone. She says melodies come naturally to her, but words can take awhile. “I’m a slow lyricist, it takes me a long time,” she says. “If I’m doing lyrics by myself, it’s kind of abstract. I say words that sound right, and then I kind of figure out what the hell I’m talking about!”

Allie X’s career advice
“Persistence. Don’t stop. It’s all about connecting the dots. I knew I could get to this point 10 years ago… even though nobody else knew it. I didn’t even know how I was going to get to this point, but I knew that I could – and I did. I didn’t have the skills, the sound, the look – and I still have so much further to go – but I knew that I had something, and I really believed that I could get somewhere.”

Vocally trained in classical music, X says people should view her songs as a personal journey toward discovering her identity.

“Music is the way I’ve always made friends. It’s been the thing that has given me a voice, literally and symbolically. It’s been the way I get out my darker feelings. I don’t know where I’d be without music.”