Special to the KW Record

In the video for the new Garbage single “Special,” guitarist Duke Erikson says the three boys in the band get into an cyber-animated airplane dogfight with their Scottish singer Shirley Manson.

“Guess,” laughs Erikson, as if to suggest the feisty Edinburgh-based Manson would have it any other way.

Outside the video world, however, Erikson confirms that relations between himself, fellow bandmates Steve Marker, Butch Vig, tour-bassist-for-hire Daniel Shulman and the striking crimson-maned singer described by CNN as ” the sensual, swaggering mouthpiece fronting Garbage ” couldn’t be better. 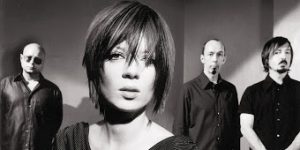 “We laugh a lot. We have a good time. There’s very little confrontation among the four of us.”

But Erikson defends her sharp tongue.

“For the most part, that’s just Shirley and she’s usually right. She’s very complicated, but we all are.”

It’s a tongue that has helped sell over four million albums around the world of Garbage’s self-titled debut and another million and a half of their current Version 2.0, as Manson’s smart, supple lyrics for songs such as “Only Happy When It Rains” and “I Think I’m Paranoid” chemically complements the passionate melodies, subversive rock rhythms and involved state-of-the-art studio sonics sculpted by the rest of the team.

While critics far and wide have praised Garbage’s fresh and innovative contraption pop, Duke Erikson is just happy that his band still has a job.

“We were surprised our fans remembered us,” says Erikson, referring to the year-long gap between touring and releasing Version 2.0.

“We were gone for awhile. It’s such a fickle business and there are so many bands that with the state of music today I think it’s easy to forget.

“But Garbage has been one surprise after another. Even how Garbage started — discovering Shirley on MTV — it’s always been that way for us. We’re constantly surprised.”

Although Garbage didn’t officially form until 1993 when Manson connected, Erikson, Vig and Marker had been musical accomplices for a handful of albums in two alternative Wisconsin bands, Spooner and Firetown.

“Firetown didn’t lend itself to much experimentation in the studio,” Erikson explains. “We did that in other bands in other contexts. We’ve always been studio hounds.”

“It wasn’t until we started doing these remixes for bands like Nine Inch Nails, House Of Pain and U2 that we started messing with the studio in a really serious way, being there for weeks on end muckin’ around. That’s where we started using technology to the extent where it almost became almost part of the songwriting process.”

Simultaneously, Shirley Manson had graduated from harmony singer and keyboardist of Brit pop band Goodbye Mr. MacKenzie to lead vocalist of Angelfish, although the latter band yielded only one video with its album, a song called “Suffocate Me.”

It seems one video was enough.

“Steve happened to have his TV on late one night and we saw the video, the one and only time it was shown with Angelfish.”

Intrigued by Manson’s talent, the band issued an invitation for her to come to Wisconsin and their privately-owned Smart Studios.

“The very first time we met Shirley we got along, which was a good sign. We knew we could be friends, and that was important. You just can’t be a group of musicians who are good at what they do. You have to be buddies, otherwise there’s no fun.”

However, the session didn’t go as smoothly as planned.

“It was a disaster,” Erikson recalls. “She felt awkward. We felt awkward. We had never done anything like that before — brought someone into our fold. Butch and I have known each other longer than we care to think about, and it must have been hellish for Shirley to come waltzing in and start singing. So it was very uncomfortable, and she went home fairly discouraged.”

Not all was lost. Erikson said the results on the tape warranted another try. The next time, everyone clicked.

“The very first song we worked on was ‘Queer.’ We had a rough vocal down, but Shirley began singing it the way you hear it on the record. We thought, this is it. Maybe that was the moment we realized it was going to work.”

“We do kind of tend to lock the door and get pretty absorbed in what we’re doing,” he says. “We have very little idea as to what’s going on. None of us have sat back long enough to digest what selling four million records means, or when people refer to us as `rock stars.’ None of us really feel that way. I think one reason is we keep working and get wrapped up in it.

“I suppose that’s healthy,” he laughs. “But it’s all been pretty unorthodox. We kind of thrive on the unexpected.”