Damon Cox and Kate Cooper are alt-rock band An Horse.

Sometimes songs that have the silliest titles turn out to be the most personal and profound for the artists that write them.

Take, for instance, “Brain On A Table,” a track off Walls, the recently released sophomore album from Australian alt-rockers An Horse, who play the Rivoli on Friday.

At first glance, the song might seem to be a humorous comment on some Frankenstein-like episode that caught the observational eye of singer and guitarist Kate Cooper. 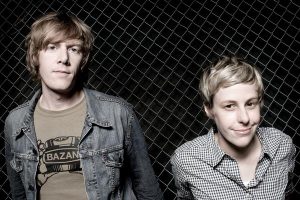 Turns out it’s about something much more serious that involved a family member.

“That was my mom,” said Cooper (a Brisbane native now living in Toronto after she “fell in love and moved here”).

“We went out on tour and in the middle of a huge two years of touring, my mom suffered a brain tumour,” she explains.

“It was brutal. While it was happening, I was thinking, ‘Do I go home? Do we cancel the tour? What do I do?’

“On one end, you have my family a million miles away saying, ‘No, you don’t need to come home. Stay there. You’re going to be no good here.’ Then, on the other hand, I feel guilty because I’m not there. It was a bit of a tumultuous time.”

At least there was a happy ending: Cooper’s mom recovered.

“She got a tumour the size of a golf ball removed from her head and, apart from some issues of taste and smell, she’s all right,” sighs Cooper. “It’s quite the miracle.”

It wasn’t quite the end of the trauma.

“Pretty much a week after she had recovered after the operation, her partner, her boyfriend, got diagnosed with cancer, and then he had to go through this treatment,” says Cooper. “It was one thing after another. But they’re both a lot better now, touch wood, and hopefully that’s the end of the run.”

Had Cooper understandably succumbed to earlier desires to visit her ailing mother, it would have put a serious crimp in An Horse’s career trajectory, since the band’s membership is only herself and drummer Damon Cox.

An Horse galloped out of the gate largely due to acclaimed Canadian duo Tegan And Sara.

Cooper’s previous outfit, Iron On, had toured as openers for the sisters Quin in Australia.

“We stayed in contact and I was sending them stuff I was working on,” Cooper recalls. “Damon and I were just friends hanging around in a record store making music.

“We had literally just finished recording a bunch of songs for An Horse and we weren’t really sure what we were going to do with it. We just decided to record it and then figure it out. The two of us weren’t very excited about putting out another independent record in Australia, because it’s a lot of hard work and there aren’t many people there. You go on tour and you do three shows.”

As fortune would have it, Tegan and Sara were playing in Brisbane and Cooper handed them unmixed copies.

“Three weeks later, at the end of 2008, they emailed me and asked, ‘Would you open for us on this huge North American tour?’ ” Cooper remembers. “And I thought it was a joke.

“We went on tour and it was amazing. We were playing to huge rooms and by the end of that tour we had a record deal. So by that point we figured out very quickly that we were going to be a real band.”

“It’s so good — I recommend everybody in their bands to fire everyone except for one person,” she says with a laugh. “Damon and I have a very similar work ethic, which is great, because you don’t always find that in people.

“I think it also demands more creativity, because you have to make more with less, and that’s kind of why we do it. I like being creative. I highly recommend it. “

An Horse, which has shared stages with Death Cab For Cutie, Cage The Elephant and Silversun Pickups, plays The Rivoli Friday.