Nick Krewen
Special To The Star,
Published on Sun Jul 24 2011

The drought is over.

The prayers of Gillian Welch disciples who have been pining for a new album since 2003’s Soul Journey were answered a few weeks back with the release of the New York City native’s excellent — and long overdue — fifth album, The Harrow & the Harvest.

The album, which will be performed in its entirety on Monday night at Toronto’s Phoenix Concert Theatre, is an acoustic, intimate, analog collection of dark-edged folk tunes scented by traces of Appalachian, bluegrass and old-timey influence, lovingly strummed, picked and plucked on guitar and banjo. It was created in partnership with Welch’s collaborator and paramour David Rawlings. 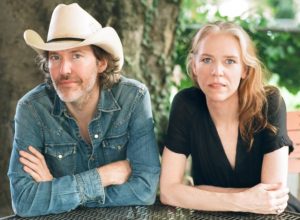 Perfectionists to the core, Welch and Rawlings don’t rely on outside help for their music, preferring to be self-sufficient.

“Self-sufficient is a good word,” Welch, 43, agrees from somewhere in Portland, Ore., where she’s strolling the streets while conducting phone interviews.

“I don’t know if we have some of the pioneering or frontier spirit, but we really thrive on independence and self-sufficiency. When we tour, we drive ourselves in our own car. We don’t like feeling like we’re being carted around the country in a bus or anything. And it’s definitely there in the music as well.

“Plus Dave and I are so fond of kind of a spacious panorama, which is kind of funny to say. There’s one way to look at our music as being very small with just the two of us, but sometimes if you let yourself sink into the world, it kind of expands, and it really fills the whole horizon and can be very cinematic.”

Welch is the first to admit that the 10 songs that comprise The Harrow & the Harvest didn’t come easily. The duo’s high personal standard is what led to the gap between albums.

“We didn’t write enough songs that we liked,” the Nashville-based musician admits. “We kept writing songs; we just didn’t like them. Really. That’s the short, non-melodramatic version.

“It was very frustrating, very painful, very disappointing. Neither Dave nor myself wanted to take an eight-year break, but we also weren’t willing to put out something that we didn’t like.”

The project started out promisingly enough: Welch says the oldest song on the record, the heartbreaking ballad “The Way It Will Be,” was written around the time of 2003’s Soul Journey.

In the interim, under the moniker David Rawlings Machine, the duo recorded and toured 2009’s A Friend of a Friend, with help from members of Old Crow Medicine Show.

The busman’s holiday was just what the doctor ordered: in October 2010, they experienced a breakthrough.

“We thematically hit our subject matter, this idea that riddles this whole record, about time passing, how it erodes things around you and how it erodes relationships: adult themes of loss and disappointment, when things don’t go the way you thought they would.

“You’re getting us at our most excited,” she enthuses. “If people come ready to hear a bunch of new songs, they’re going to have a great night.

“They’re going to get an earful of this one.”

Be the first to comment on "Gillian Welch’s album, eight years in the making"