Fear is either a paralyzer or a galvanizer, and no one knows that situation better than four-time Grammy nominee Yola, the current purveyor of big-voiced country soul.

After wrestling with self-doubt for decades – and finally winning the battle with the release of her critically acclaimed debut solo offering Walk Through Fire, the Bristol, U.K.-based singer and songwriter refers to it as her “break-up album…” with herself.

“There was a version of me I called ‘Doormat Yola’ and she was strong on the outside, but inside, she was a complete doormat and all the things that went along with it,” explained Yola down the line from Cambridge, Massachusetts on Tuesday, prior to a Sunday appearance at The Horseshoe Tavern with her four-piece band.

Even though she’s competing for Best New Artist  Grammy against such newbies as Billie Eilish, Lil Nas X, Lizzo and Maggie Rogers, to name a few contenders, Yola – now in her mid-30s –  is one of those 20-year overnight sensations, stacking up an impressive list of credits on the way to finally commandeering her own project.

She was identifying herself as Yolanda Quartey when she briefly fronted Massive Attack as its singer for an appearance at Glastonbury back in 2008; fronted the UK neo-country soul collective Phantom Limb in 2010; written songs for UK artists Will Young and Chase and Status – and shared stages with Kacey Musgraves, Mavis Staples and Dolly Parton.

Yola understood that even though these accomplishments were impressive, she felt unfulfilled.

“I realized there are a lot of these big moments, but if you’re not doing what you want to be doing, you’re not really paying all of that into your internal bank,” Yola explains. “I spent a lot of time building up other peoples’ careers, essentially. I was always the go-to, ‘don’t worry about her, she can sing everything’ person. I just got to the point where my need to create overtook my fear of being a leader.

“I was just terrified of the concept, and I had to make a big change if I wanted to do what I wanted to do musically. I made some changes in my environment and found a wealth of people who were wanting to join me on this crazy journey to figure out how I could truly be as genre-fluid as I wanted to be.” 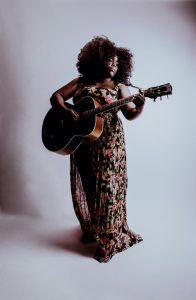 Part of the reason that Yola took so long to achieve independence was financing – she grew up impoverished and took a while before she could string together enough opportunities to think outside the survival box.

She suffered a bout of homelessness and at one point her Bristol apartment went up in flames. Her mother’s death also profoundly affected her, but with her passing she learned a valuable lesson that helped her thrive.

“If you haven’t lost a parent, you don’t have the perspective necessarily to know how no one is getting out of this thing alive,” she notes. “And the things that we can take to the precipice of life  are the people we know or the things that we’re doing.  And all the things that  you might want to whine about, houses, cars or all the trappings of celebrity, start meaning less and less.

“I realized that I should be focusing my energy on not just trying to survive day-to-day, but to build something that’s going to keep me on an emotional level, so by the time I was in this fire, I was prepped for that epiphany.”

Yola also observed and noted the importance of a support structure – and realized she could serve as her own support once her finances stabilized.

“Then I wrote some pop songs and realized I was going to be my own rich Daddy. It was that moment where I realized I was no longer alone and that I had this fallback.”

There was one more key realization – and that came when Yola visited Nashville in 2010 on a writing trip.

“Nashville is very close to Memphis – and suddenly, people are no longer having to explain the proximity between soul and country, because there’s one singular interstate between the homes of both,” Yola said.” It was a lot easier and more straightforward conversation to have, about what I wanted to do going forward.”

Walk Through Fire, produced by The Black Keys’ Dan Auerbach and nominated for Best Americana album, is certainly a worthy harbinger, with the project’s dozen songs showcasing Yola’s appealing alto and mixing a big, orchestrated classic pop feel with the occasional country twang.  She’s also taken the interesting step of writing with such veteran tunesmiths as Dan Penn and Carpenters lyricist  John Bettis, wish she said was at the suggestion of Auerbach.

“A lot of the things that I’m singing about are things in my life that used to be,  that fear of breaking up with yourself thinking you’re going to lose something, but also, that kind of loss of the unhealthy relationship and the kind of fear I used to feel,” she explains.

“When you’re no longer an oddity and you just get to be an artist, that’s when you get to actually exhibit some of the tenets of freedom.”

She promises that freedom will be exercised in future recordings: she says she has no interest in creating “Walk Through Fire II.”

“I always talk about being genre-fluid and being able to move through genres and enjoy music in a broader sense, as much as musicians have eclectic tastes in music, I seek to achieve eclectic .

“That’s really my future – it’s about exploration. It’s about seeing how far I can go with my self-expression, certainly my writing  – I don’t ever want to put a cap on my writing.”

And for those who want to realize their own dreams, Yola imparts these words of wisdom:

“If you want to self-actualize, fear is not your friend.”