There’s something to be said for touring smaller markets.

“It’s really opened my eyes,” says Cairns over the phone from his Calgary hotel room.

“Before this tour, I didn’t think Canada existed outside Toronto, Montreal and Vancouver. But there’s a lot more culture outside those three big cities.” 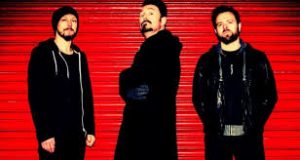 Cairns says the response to his band’s electrically charged rock music has been “amazing” and what particularly surprises him is that his audience knows the words to all the songs in Therapy?’s six-disc catalogue.

That’s not bad for a band that isn’t anywhere near a household name.

Despite such first-rate albums as Nurse, Troublegum and the more recent Infernal Love, Therapy? enjoys cult status here and in Europe at best, despite having a top 10 U.K. hit with “Screamager” a few years ago. A prior Canadian tour might have remedied the situation, but Cairns says the band received bad advice.

“We made the mistake of listening to people telling us that the only feasible Canadian markets were the Big Three,” says Cairns, 31, a former Goodyear rubber tester. “But you have to give people respect. Like every other country, there are people in smaller cities that don’t get a chance to see a lot of rock bands and are starving for it. The crowds in Whistler, Edmonton and Banff have been great.”

Therapy? and The Doughboys first crossed paths four years ago when the Montreal band were looking for an opening slot in Germany. They decided to return the favor by inviting Therapy? to join them on the road while promoting their own new album, Turn Me On.

“We kept bumping into them and getting along well,” recalls Cairns. “When they invited us on this tour, we weren’t doing anything but sitting at home. We thought this would be a good opportunity.”

It also gives Canadians a chance to acquaint themselves with rock music’s most underrated band, a phenomenal live act that goes for the throat with every fiery performance. Although Therapy? is religiously covered by respected European metal mag Kerrang!!!, the band’s music is neither glamorous nor superficial, but a potent, caustic brew of cheeky intellect.

“I write songs for myself, to get things out of my system,” says Cairns. “I think things should be honest, although I think a lot of people miss that there’s a great deal of humor, mocking and scorn in Therapy?’s music. Our album Troublegum was a teenage-angst pop record written from a teenager’s perspective with tongue in cheek, while Infernal Love was an indecisive, objective look at the outside effects things have on your relationships.” 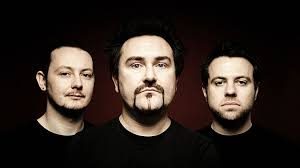 Originally formed as a trio in Larne just outside Belfast in 1989, Therapy? recently expanded to a quartet this Spring with the addition of Martin McCarrick on cello and guitar and drummer Graham Hopkins replacing original stickpounder Fyfe Ewing. Bassist Michael McKeegan rounds out Therapy’s line-up, which heads to the studio in early ’97 to begin recording a new album.

And for those who haven’t experienced Therapy?, Andy Cairns says the band prides themselves on integrity.

“We’re a rock band in the way you’d consider The Pixies a rock band,” he says. “But we’re far removed from the Spandex and Flying V guitar brigade.”