PUBLISHED IN THE KITCHENER-WATERLOO RECORD APRIL 3, 1998

When you’ve been around as long as Sleepy LaBeef, the myths start piling on as frequently as the miles.

Now celebrating his 40th year on the road, the legendary rockabilly, country, gospel and blues specialist was rumored to have entered the wrestling ring to supplement his early income as a musician.

“You’re talking about The Golden Apollo. He wanted to train me at one time, but I was never interested. I thought it was too much of a novelty. The same thing with Hollywood. I starred in one movie called Monster And The Stripper, and they wanted me to go to Hollywood. But I’m a singer, first. I enjoy what I do.” 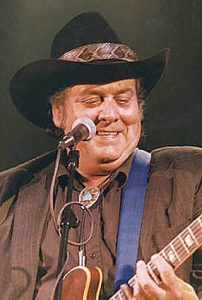 One rumor concerning the Arkansas-born LaBeef is true, however. He earned his nickname “The Human Jukebox” because his repertoire includes almost 6000 songs — although LaBeef himself disputes the exact number.

“I don’t know how many I know,” says LaBeef, “I know that there are some people following me around and jotting down song titles on a yellow legal pad. Some I’ve forgotten, but I can go a few months without repeating a song.”

For a sample of the depth of his archives, one need only check the selections from his latest Rounder album, 1996’s I’ll Never Lay My Guitar Down. How’s this for a potpourri of American culture: Tony Joe White‘s “Roosevelt & Ira Lee”; a medley of Eddy Clearwater‘s “I Wouldn’t Lay My Guitar Down” and “Hillbilly Boogie”; Nat Stuckey‘s “Sweet Thang”; the traditional “Columbus Stockade Blues” and Johnny Horton‘s “I’m Coming Home”, to name a few.

The 61-year-old LaBeef credits his enormous song catalogue to a flood of influences he heard while growing up in Smackover, Arkansas.

“I heard foot-clappin’, hand-stompin’ gospel music and a cross-section of country, blues and rock ‘n roll,” recalls LaBeef, who has never been without a label since first recording for Starday in 1956.

Refusing to restrict himself to any one style means that LaBeef requires a band with a sharp ear and steady nerves.

“We’re pretty spontaneous,” he admits. “You have to have a good sense of timing, and be ready to play rock and roll, blues, bluegrass, Western Swing and country. You have to be blessed with a good ear.”

“People enjoy variety,” states LaBeef. “Sometimes the powers that be don’t see it that way. I know when I was raised in Arkansas. I didn’t close my ears or my eyes. You can’t underestimate public intelligence or public taste.”

Sleepy LaBeef is living proof. His vast repertoire and uniquely interpretative, energetic performances have earned him steady work and an international reputation.

“I usually go across the U.S. twice a year, and travel through Europe four or five times a year,” says LaBeef, who lives near Boston but has called Houston, Nashville and New York home in the past.

“Europe treats us really well because they don’t get the American roots music too often. I think sometimes we take it for granted.”

As one who travels often, Sleepy LaBeef has also mastered the fine art of packing.

“You learn to pack what you need — and then eliminate half of it,” he jokes.