Even if you’ve never witnessed Pitbull in concert before, there are enough familiar references in the Miami-based rapper’s energetic 90-minute set that might surprise you.

For example, during his performance at the Molson Amphitheatre in Toronto on June 5, the audience received aural familiarities such as the guitar intro to Guns N’ Roses‘ “Sweet Child O’ Mine,” a few phrases of the Beastie Boys‘ “(You Gotta) Fight For Your Right (To Party)” and a-ha‘s familiar synth-driven opening for “Take On Me.”

Armando Pérez, aka Pitbull, also filled larger-than-life screens with many of the superstar duet partners he’s accumulated over the years, with Jennifer Lopez, Christina Aguilera, Usher, and Shakira comprising some of the A-list talent who have graced his recordings (and vice versa). 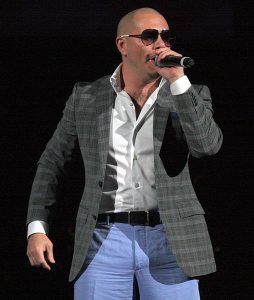 But it was the man of the hour and his mega-tight seven-piece band that pumped the electric vibe of Pitbull’s relentless crunk-inspired rap to ear-pummeling volume — the music and the rhythms were so loud that you couldn’t actually make out what the occasional sax player was performing.

No matter, Pitbull — garbed in an expensive black suit and his trademark sunglasses — pushed the momentum to the max with such driving favorites as “Back In Time,” “Don’t Stop The Party” and “Feel This Moment” buoying his strident fans.

As much as Pitbull received props for his charming and commanding stage presence, the show’s finest moments occurred when he tapped his Cuban heritage for the Latin rhythms and Spanish language of “Culo,” “Echa Pa’lla (Manos Pa’rriba),” “Shake Señora,” and “Bon Bon,” the embrace of his culture leaving an indelible imprint on his audience.

By the time the show climaxed with “Give Me Everything,” Pitbull had proven once again why he’s one of the fastest rising stars in mainstream pop.

On the other end of the spectrum was co-headliner Ke$ha, who launched her hour-long opening slot as six blue-lipsticked “samurais” danced with swords to kick off “Warrior.”

The singer/songwriter certainly possesses a unique visual flair, as she spun a primarily suggestive 13-song set that included “We R Who We R,” “Take It Off” and “Tik Tok,” while her dancers acted their parts dressed in animal costumes, in drag, looks inspired by San Francisco performing art rockers the Residents, and as bopping appendages.

To catch Pitbull and Ke$ha in a city near you, click here for tour dates.

Be the first to comment on "Welcome to the Set List: Pitbull and Ke$ha at the Molson Amphitheatre, Toronto"