Matt Mays got plenty of blowback for accusing Rob Ford of taking his seat at an NFL game, but the Halifax musician won’t swear off social media.

Matt Mays has enough new music, he says, to put together a new album next year.

Rob Ford is the inescapable man, and no one knows this better than Matt Mays.

The Halifax singer and songwriter unwittingly got sucked into the Toronto mayor’s vortex of notoriety last Sunday when he bought a $250 VIP ticket at the Rogers Centre for the Buffalo Bills-Atlanta Falcons NFL football game, went to take his seat and found the celebrity squatter occupying his seat.

Mays tweeted the following, which went viral: “Rob Ford is sitting in my seat at the Bills game. He stole my seat. I don’t know what to do. I’m by myself. I gotta kick him out right? I mean I would kick anyone else out . . . Am I wrong?”

He eventually got his seat back — Ford voluntarily vacated it — at halftime, but by then the damage had been done and Mays was on the receiving end of some pretty nasty tweets, with one sourpuss branding him “a wimp” and another accusing him of trying to stage an elaborate publicity stunt.

At the time, the shade from those respondents seemed to affect Mays, enough for him to respond on Twitter: “Angry birds, angry whoppers, angry planet, angry Toronto, bummed out Matty. So much hate. It makes me sad. This has turned into a piranha pool! Can we talk about music again? Like how Billie Dre and the Poor Boys slay?” 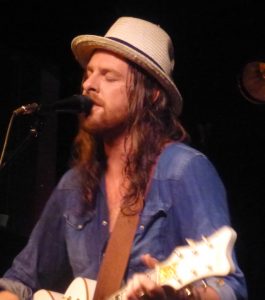 But four days and a profile-raising avalanche later, it’s water off a duck’s back.

“I didn’t expect it to blow up the way it did,” says the Hamilton-born Mays, booked for a Dec.12-14 stint at the Horseshoe Tavern to help the legendary venue celebrate birthday No. 66, over the phone from somewhere in Nova Scotia on Thursday.

“But I don’t care at all about it. I get many more positive Twitter comments than negative comments. I just find it all really entertaining.”

He recalls the difference in public reaction surrounding the release of his current album, 2012’s Coyote, and his previous project, 2008’s Terminal Romance — a time when Twitter was still a toddler.

“It’s insane,” he explains. “The difference between releases has been unbelievable: night and day.
“When I put out Terminal Romance, social media hadn’t really taken hold yet. Or Twitter. But in terms of getting people out to shows and them getting the album — everything just moves faster, which is kind of imperative when you’re pushing something like an album.
“You want to get it out as fast as possible, because it doesn’t last forever. The blitz will end. But I find with social media, the blitz you can have is a lot more intense, and that really does help spread the word.”

Mays, who has five albums to his credit following a stint in The Guthries, says the current trend has brought him closer to his audience.

“I feel that I have a lot of faces I know out there, whereas before there was this unknown group of people that you meet briefly after shows, but you can have conversations and answer questions, have a laugh.”

Personally, Twitter also begat and cemented a friendship with The Gaslight Anthem singer Brian Fallon.
“He tweeted about how much he liked one of my records, which blew me away, because I didn’t think he even knew who I was,” Mays recalls. “He was tweeting all the time about how much he liked my music and I thought that was fantastic.

“So I got back to him on Twitter and we sort of became like pen pals, and then we were hired across the U.S. Gasoline tour as direct support — and it was the beginning of a good friendship.

As for Mays’ recent music, Coyote is much different animal then its predecessors: still rock-driven but more refined; confident, but risky and stylistic; offering intriguing songs like “Indio” and “Ain’t That the Truth” that reflect themes of freedom due to its author’s nomadic lifestyle.

“I like traveling, I like change of scenery,” says Mays, 34. “I don’t like being stagnant and staying in one place. Ultimately, what it comes down to is that I don’t have a job where I need to be in a certain place. I can do it from wherever, and I like to take advantage of that.”

It’s that mobility that led him to Nashville for a few days, where he met Lindi Ortega and made a cameo in her new “Tin Star” video. And he says he applies the same freewheeling philosophy to his songwriting.
“I don’t try to put any pressure on songs at all,” he admits. “I don’t try to force them out. I don’t like to scare ’em off, just slide them in.
“If I never write another song again, I’d be bummed out, but I wouldn’t freak out. I just feel lucky to have as many as I’ve had, and I’m grateful for that. It’s a real mystery that I’ve stopped trying to figure out.”

But he says he has enough songs under his belt to finish a new album, which Mays thinks he’s going to record in California after taking a six-month break following a New Year’s Eve gig in Nova Scotia, and bidding farewell to a year that saw the passing of his guitarist Jay Smith in March.

However, first up are the Horseshoe dates, which Mays will be performing with his band.

“I’ll have some guests show up,” he promises. “Ladies of the Canyon are opening up all three shows and they’re good friends of mine. It’s going to be fun having them around, and friends and other singers, hanging out backstage, have a laugh, get up and play songs. We’re going to keep everything light — Horseshoe style, you know?”

Will the set list include the debut of a song about a prominent seat-stealing mayor?