The Australian native professionally known as Tones And I, the originator of the impossibly irresistible chart-topping smash “Dance Monkey,” was really looking forward to entertaining you at the Queen Elizabeth Theatre in April when COVID-19 interrupted her plans.

“Toronto was meant to be my biggest show of the whole tour, so that was really exciting,” said Watson last week via FaceTime from Australia.

“So, I’m pretty bummed out that I had to postpone it.” 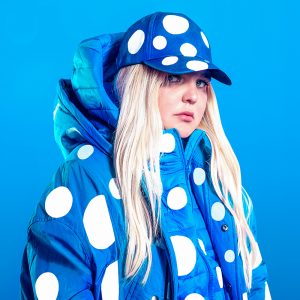 Toni Watson of Tones and I

Until the pandemic pretty much punted live entertainment for the time being, Tones and I was on a roll: touring around the world to keep up with the demand the synth-laden “Dance Monkey” has generated, topping charts in 30 countries.

Her Spotify presence has been so dominant that last week – with 1.5 billion streams under its belt  – the tune was declared to be the most streamed song by a female artist on the service, which accounts for nearly 40% of the music streaming market.

The funny thing is that fame is the last thing Watson expected.

Even a year ago, she was performing near a hostel in the popular beach resort town of Byron Bay, living in her car, and – according to her, “setting up all this electronic equipment, busking for six hours, writing music during the day, busking again and playing seven nights a week.”

And she was very okay with it.

“I wanted to perform – I never wanted to be famous,” admits Watson.

“That’s probably the difference between someone who just writes songs in their room and just sends them out – and someone who says, ‘I just want to perform.’

“I didn’t know that any of this stuff was going to happen. I said, ‘I’m going to busk until I’m 50 years old, because this is what makes me happy.’”

But success, it seems, was eager to find her.

The Melbourne native was courted by Australia’s triple j radio, (the Down Under equivalent to Indie88 or The Edge) and her current managers at Lemon Tree Music, home of Tash Sultana, also campaigned to represent her, mainly through the buzz her music was producing throughout the beach town community.

“My managers took me on three or four months before I released a song,” Watson explains.

“They took me on without a contract as well, just to show good faith and how much they believed in me. They didn’t take any commission even when I had my first sold out tour and really wanted to show me it was about music and about me.”

Until that point, Watson admits she was “so naïve” about the music business.

“To me, that was a huge shock – finding out that my song was going crazy around the world and finding out there were charts in every country.”

The story behind “Dance Monkey”

How did Watson write “Dance Monkey,” Australia’s biggest breakout hit since Gotye’s 2011 smash “Somebody That I Used To Know” and one that has sold 560,000 copies in Canada?

“I wrote ‘Dance Monkey’ about me busking and feeling the pressure of people constantly wanting more,” she replies.

Watson added that she created it “in so little amount of time” and read the lyrics off her cell phone the first time she performed it.

“I wrote that song for my friends, for the hostel. I wanted to write a song with a bass drop chorus that everyone could just dance to.

“Every Tuesday night at the hostel we had a talent show and everyone would play a few songs. I’d write a new song every week and  practice  with all my friends there. Then I’d play it on the street and get it perfect.

“For this one, as soon as I started singing the chorus, everyone just got up and started dancing. It was the craziest thing. And then it became that song for our summer for us.

“I didn’t release that song for five months. I was playing it on the street every day and it took me five months to release it.”

Before that, Australia had embraced her with her first hit, ““Johnny Run Away,” sold several hundred thousand copies.

Exploding out of the gate

But “Dance Monkey” exploded out of the gate, holding the No 1 spot on the Australia Recording Industry Association charts for 16 weeks – a new record – and in total, 22 weeks.

Suddenly, the world wanted her.

“I can’t even pinpoint how any of this happened,” says Watson.

She admits it’s been a quick and thrilling ride.

“You move so quickly – it’s like you’re on a Roller coaster and you know it’s about to go and you can’t say ‘no’.”

The song has also paid off dividends in terms of celebrity access for Tones and I’s Watson.

“I met Macklemore and we worked on some songs together,” she admits. “If you told me a year ago that I’d be doing that, I’d say, ‘there’s no way.’

“When you’re out there and you’re doing well, other artists respect you enough that they want to meet with you and talk about music.  You get to meet your idols.

“Literally, this time last year, I was still busking on the street.”

For the moment, everything has ground to a stop – at least on the touring front.

After the success of her The Kids Are Coming EP, Watson says she’s prepping the debut Tones and I album for an August release, as plans to work with different engineers while she was touring have been scuttled.

But it also gives her a chance to breathe and reflect on how a local Byron Bay sensation has now turned into a global phenomenon who has surpassed her wildest dreams.

“The thought for me was, if I can make enough money to get by and my only job is to play music every day, then I’ve made it,” Toni Watson reflects.

“That was important to me – I didn’t care about having money or being famous.

“When I was living to be able to eat and go have a beer with my friends and put petrol in my car then I felt I’d already made it. I made the decision myself to feel like I succeeded by not trying to reach a really high crazy goal.

“Because I didn’t have that in mind and I wasn’t fueled by that, I just wanted to perform for people.  I guess it just kind of happened in the end.”