April Fool’s Day may have played its cruelest joke on the El Mocambo’s Michael Wekerle.

After spending five years investing a reported $30 million (in a follow-up e-mail, he’d only say it’s “extensive”) in renovating the legendary Spadina Avenue music club that has played host to everyone from The Rolling Stones to U2, the merchant banker and Dragon’s Den TV personality was finally set to open its doors to the public on April 1.

And he was going to do it in grand Canadian style…but COVID-19 had other plans..

“Ironically, it was April Fool’s. I thought it would be ideal because I kept telling people it would open so many times that I sounded like the boy who cried ‘wolf,’” Wekerle, 56,  recently told the Star over the phone.

“We had planned a full roster of Canadian music for the first four days that would include everyone from 54.40 to Our Lady Peace.  We reached out to produce a special event for Ronnie Hawkins, who has played the El Mocambo more than anyone else. We had Crowbar and Robbie Robertson  was going to give a dedication speech. We had David Wilcox, Billy Talent, July Talk – we were working with City And Colour. We were really warming up to have a Kim Mitchell release party for his new album and a comedy act like The Trailer Park Boys.

“We had all these things planned. Unfortunately, it all fell apart.”

The 750-capacity El Mocambo wasn’t the only grand reopening stopped in its tracks due to pandemic precautions: the 171-year-old Wheat Sheaf Tavern, which had just undergone a facelift and had held a preview party celebrating its resurrection just before its official St. Patrick’s Day grand reopening, was also robbed.

“In fact, our opening day was supposed to be March 17, the day everything was shut down,” says Shawn Creamer, the Wheat Sheaf director of programming. 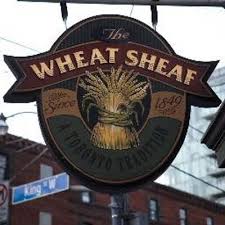 “But I think everyone’s got the highest of hopes that when all of this is over, people are going to want to drink and sing and dance again – and we’re going to be okay.”

Scuttled Wheat Sheaf plans included an alternative “all-star” band that included Creamer and Jud Ruhl from the Beauties, Michael Boguski from Blue Rodeo, Robert Sand from the LayRite Boys  and the band Mariachi Fuego, and a cover performance of The Pogues’  1984 album Town and Country.

But Creamer says the province made the right call.

“We knew pretty quickly that a 200-capacity place is not a place for people to hang out.”

What was more of a disappointment for Cramer is that he had the venue booked for two months, comprised of mainly local talent.

“We had just trained the staff, stocked the kitchen and stocked the bar and on St. Patrick’s Day we still got a delivery of 17 kegs of Guinness although we weren’t open. They’re just sitting in the cold.“

While Creamer feels that the Wheat Sheaf is on safe financial ground – “we’re going to reopen when this is all over – it was a big investment and I think there’s a back-up plan there” – he’s more concerned about his own Prince Edward County music venue The Hayloft.

“That’s going to be a tougher haul,” says Creamer. “I do concerts on Fridays and on Saturdays we do barn parties, which includes tourist and bachelorette parties. It’s totally a tourist business. We’re in the middle of nowhere. You have to take one of our buses to come out to the barn to go to the show.

“Our opening weekend was going to be May 15 with The Sadies – I’m doubtful. And with tourists – are people even going to want to go? So that business I’m more concerned about for me.”

Another recently re-opened venue – The Comfort Zone, which also contains The Silver Dollar Room – is hoping that it can be of service to the homeless community.

“We are ready to provide temporary shelter to the homeless right now.”

Korosh said he’s sent letters to Premier Doug Ford, Mayor John Tory and councillor Gord Perks  and is awaiting a response that will give him the green light.

He also feels that his facility is big enough to accommodate approximately 100 people that includes room for  “proper social distancing” should he get the okay to help out those less fortunate.

He stresses that the offer would only extend for the length of the COVID-19 emergency measures.

“If we get the green light and everything’s clear, then it’s back to business as usual,” he said.

In Niagara Falls, Ontario, Fallsview Casino’s newly constructed 5000 seat Entertainment Centre was booked to premiere April 2 with country superstar Brad Paisley and a future lineup that included everyone from Kesha and Z.Z. Top to Alison Krauss and Of Monsters and Men.

Of course, the government shutdown has scuttled those plans – with the exception of the Texas blues rock trio Z.Z. Top , who are still listed for mid-May –  but the Paisley date is now pushed to December 4. Others have been bumped to August.

When contacted by the Star, Fallsview Casino offered no comment.

The pandemic has also potentially delayed two other big openings.

Massey Hall was still under active renovation when the Star drove by on March 30, spotting a construction worker on the Shuter Street building’s exterior. But with Premier Doug Ford’s announcement last Friday to put a hold on all non-essential construction, one assumes that this could further delay the music venue’s $142 million renovation and perhaps knock its proposed mid-2021 opening, (which had already been rescheduled from a potential September 2020 reintroduction) further into the future.

When it does finally return, Toronto’s 126-year-old Grand Old Lady will include an additional 500-capacity performance space,  an expansion of the Centuries basement bar to also hold 500, and a retractable floor  for Massey Hall to be able to hold general admission events and expand its own capacity to 2900.

Another potential victim of construction stoppage could be the 2,500-seat live entertainment venue promised by the Pickering Casino Resort. While the complex itself was slated to open this Spring, the venue and an on-site hotel were destined to be completed by sometime in 2021.

Of all the venues mentioned, it’s Michael Wekerle’s reimagination of the El Mocambo that drums up the most curiosity.

When the city finally deems it safe for the 10,000 sq. ft. venue to open, Wekerle promises a state-of-the-art transformation that will include three performance spaces (The Starlight Lounge on the first floor, the El Mo on the second and an artist’s VIP room on the third) equipped to stream high resolution audio and video and one that houses a state of the art recording and broadcast facility.

Each stage will front large LED screens with smaller 4K screens positioned through the venue – and a floating floor and ceilings will keep the sound self-contained in the club.

Wekerle also intends to launch a charity component of the El Mo’s streaming platform to benefit artists who have been affected by COVID-19 and raise money for mental health, as well as an online auction to raise money for the club that will feature memorabilia, much of it from Wekerle’s own personal collection.

He admits that, along with everyone else, he’s taking a hit from the club as long as the doors remain closed.

But he insists he has a game plan.

“Yes, financially it’s going to hurt me,” says Wekerle. “I’ve made contingency plans to make sure that I’ve matched my capital – I’ve had quite a meltdown in my personal portfolio but so has everyone else. It is what it is. You can’t do anything about it – you have to move on in life.  Things will return.

“It’s like a chess game – you’ve got to look at your next four moves, not the first move you do.”

At the end, he feels confident that the public will support his venture once it’s allowed to.