PUBLISHED IN THE HAMILTON SPECTATOR

If you want a record deal, try your local hairdresser.

It worked for TLC, the hot Atlanta baby faced pop trio whose month-long reign at #1 on Billboard’s Hot 100 with the song “Creep” ended last week.

Four years ago, Tionne “T-Boz” Watkins was a struggling singer looking for the right connection. When she met Lisa “Left-Eye” Lopes during an audition and realized the duo had a special chemistry, she trekked out to her hairstylist, Marie Davis, whose clientele included Perri “Pebbles” Reid, recording star and manager. 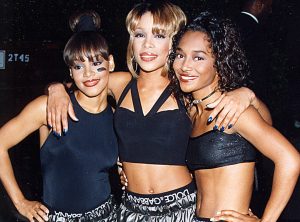 “My hairstylist told me for a year and a half that Pebbles was looking for a girl group,” said Watkins last week in an exclusive interview. “So I finally went up there and told her, ‘I’m in a girl group.’ She and Pebbles took us out to eat that night.”

A month later, Pebbles arranged TLC an audition with her husband, Antonio “L.A.” Reid — a successful songwriting producer who was in the process of forming LaFace Records with his partner, Kenny “Babyface” Edmonds.

Watkins and Lopes had rehearsed with another girl, but replaced her with Rozonda “Chilli” Thomas in a stroke of luck.

“The same day we met, we auditioned for L.A. Reid, (producer) Darryl Simmons, ‘Face’ and (producer) Dallas Austin to see if they would produce an album,” recalls Watkins, an Iowa native.

“I never will forget it. Lisa and I had done a demo with (producer) Jermaine Dupri of a song called ‘I Got It Going On,’ so we performed that as a group. Then I did ‘I Wanna Get With You’ by Guy. Chilli performed ‘Hold On’ by En Vogue, and Lisa did one of her raps. We did a show of just freestyle dancing, and they were like, ‘Oh yeah, we’ll do ’em!'”

Watkins figures TLC got the deal due to their trident of talent.

“It was exciting to them because they hadn’t seen anyone like us,” says Watkins, “I sing like a man, and Left-Eye is confident rapping, and Chilli’s singing R&B. It’s a combination thing where the vibe was good.”

The trio’s new album, CrazySexyCool — which has sold over 2 million copies in just four months — reflects an older, more mature TLC, according to Watkins.

“We’re all growing together,” says Watkins. “It’s just on a different level. We’re talking about relationships whether it’s between a man and a woman, people in society, or life situations. It still has lots of dancing music and is about letting people feel what you’re talking about.”

TLC has been forced to do a lot of growing in public recently, in light of Lopes’ arrest last June 9 for torching the mansion of her boyfriend, Atlanta Falcons football star Andre Rison.

Lopes pleaded guilty on one count of arson in January and was sentence to a four-month term in a diversion centre for therapy and work release, according to her publicist at LaFace Records. 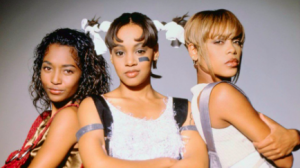 At the conclusion of her sentence, she’s scheduled to rejoin TLC in April, in time to plan a world tour that should see them hit Canada before the end of ’95.

“We’re not tripping because that’s just life,” says Watkins, who like her bandmates, looks several years younger than 23.

“It wouldn’t have been as blown up as the O.J. Simpson thing if she wasn’t in the limelight. Everybody has a life, and she’s just human. What we do is our jobs. People look at it as being stars, but we’re people doing what we like to do. We’re just more popular than others, that’s all.”