When Christian hard rock trio Thousand Foot Krutch split from its label after 10 years and selling nearly one million albums, the Toronto-area band was at a crossroads.

“At the end of the day, we just felt that we’d hit a ceiling,” said singer and songwriter Trevor McNevan, 33, of the band’s association with EMI’s Tooth And Nail Records. “We’d been praying and sorting through our options, and we had some incredible record deals on the table.” 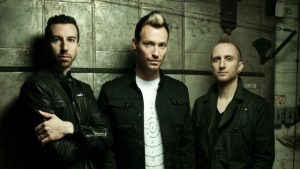 Instead of revisiting the typical scenario — record company pays large advance, owns the final master, shares marketing costs with band, with band receiving royalites of 10-13 per cent only after they’ve recouped costs to the label, and still forfeits ownership of master to the label — Thousand Foot Krutch took a real leap of faith: They decided to go the social media route and raise money to record their new album through Kickstarter, the self-described “world’s largest funding platform for creative projects.”
The band listed their request to fund their sixth album during a 30-day campaign in December, promising such incentives as signature guitars, handwritten lyrics and Skype phone calls with certain pledge levels.
Their goal: $40,000.

“We reached that in less than 12 hours,” revealed an astonished McNevan.

The first is actually still going on as we speak: with 18 days left in her Kickstarter crusade, Boston-based singer and songwriter Amanda Palmer — co-founder of The Dresden Dolls and Evelyn Evelyn — has raised a record $663,227 to help promote, manufacture and distribute an album she recorded with her new outfit The Grand Theft Orchestra that will be out in September. The bets are on as to whether Palmer will reach $1 million in pledges by the time she hits her May 31 deadline.

In the case of Thousand Foot Krutch, the resulting album, The End Is Where We Begin, debuted three weeks ago at the top of Billboard’s Hard Rock Album and Christian Album charts; No. 3 on the Alternative Album and Independent Album charts, and No. 14 on the Billboard Top 200 for the band’s best crossover sales results ever.

“It was definitely a kind of a firecracker start that we’re excited about,” says McNevan, a Peterborough native now based in Brentwood, Tenn., a stone’s throw from Nashville. Bass player Joel Bruyere still calls Windsor home, while drummer Steve Augustine lives in Grimsby.

“We’ve always serviced radio from active rock to alternative, as well as the Christian market. We’ve always toured both markets, and it’s in our hearts to make music for everyone. It’s something we haven’t achieved on previous records, and it’s exciting to see the growth there.”

The New York-based Kickstarter doesn’t fund only music projects: artists, filmmaker, fashion designer or even inventors can go the crowd-funding route. For its trouble, Kickstarter takes five per cent of the tally raised, and another three to five per cent goes to Amazon for processing the pledges.

For bands like Thousand Foot Krutch, however, that’s a modest price to pay considering the money raised is free from such encumbrances as record company debt and allows them to retain full ownership of their intellectual property.

And even though McNevan, whose band performs at the Overflow Youth Conference in Waterloo on May 19 and whose “War Of Change” has been licensed for this Sunday’s WWE Over The Limit pay-per-view, admits that the $105,000 won’t cover the full “$600,000 cost of this record” by the time promotion, publicity and marketing expenses are all factored in.

But he says the real dividend is a closer relationship with the band’s fans.

“We wanted to connect with them on a more intimate level and we wanted to be able to do this together.”