Eighties pop star, tech entrepreneur, now game designer — and through it all, a science obsessive. Ever the inventive sort, Thomas Dolby is bringing a special guest to Monday night’s gig at the Mod Club: his own time machine.

“It’s a 1930s Teardrop trailer that looks like Jules Verne customized it and (inventor) Nikola Tesla did the wiring,” Dolby explains down the line from a U.S. tour stop.

“It’ll be parked outside the venue, and you can come down and sit in it, and leave your own private message for the future. I say ‘private,’ but the best messages will go up on YouTube, where they’ll be viewed by millions of people.”

Concert goers may experience a time warp of their own with the public return of Dolby, 53, who burst out of the new wave scene in the early ’80s with such hits as “She Blinded Me With Science,” “One of Our Submarines” and a handful of albums before he disappeared, returning only to the mainstream with 2011’s A Map of the Floating City, his first album in 20 years. 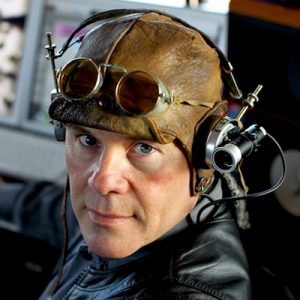 “It took me far longer to get through my Silicon Valley chapter than I’d anticipated,” Dolby confesses. “I went there in the early ’90s thinking I’d take a two-or-three-year sabbatical away from music.

“One thing led to another, and my company trod water for many years. It ended up being very successful, but it took a while to get there. And as the case with many entrepreneurs, I think I got my sense of self very wrapped up in the brand of my company, so I couldn’t leave it be until it had come to a decent conclusion.”

“The irony really was the success of Beatnik (the company he left) was in an area that creatively didn’t thrill me,” he explains.

“In reality, we used to do some very cool interactive music stuff, like the apps you see on iPhones today, except that we were doing it 20 years ago, and we made absolutely no money at all.

“It was only when Nokia came along and licensed our synthesizer that we started to do well, and that was in the area of sound on phones, which I had very little interest in, quite frankly.”

But he didn’t leave the his fans behind entirely, inventing a web-based game called The Floating City (floatingcity.com) to help ease him back into the public eye.

“I didn’t think of the game really until I was halfway through the album,” says Dolby, a father of three who has been married to ex-Dynasty actress Kathleen Beller since 1988. However, he said that he’d noticed how fans online seemed to enjoy actively engaging with his work, whether notating chord sequences or writing fan fiction about characters in his songs.

“People are not buying a lot of albums, but they’re spending a lot of time playing games and in social networks, so The Floating City game was really a way for me to reach out, and also embrace a new audience.”

The music on A Map of the Floating City is surprisingly organic: 11 immaculately constructed, exceedingly melodic pop songs with traditional instruments like trombones and banjos. Dolby seems heartened by what he calls the “meritocracy” of the Internet. 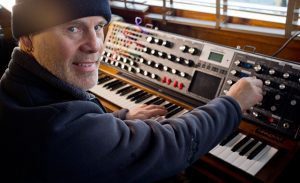 Thomas Dolby with his Moog synthesizer

“I love the fact that you can record a YouTube clip in your pyjamas on your laptop, and wake up the next morning a global superstar,” he explains.

“I think everyone now has the promise of being able to make a living based on having a great mailing list, on building their fan base and selling directly to them, and keeping the majority of profits, giving only a few percentages away to intermediaries, and I think that’s very good news.”

Dolby also promises to continue to bind his music with science.

“I like the way science influences our lives,” he admits. “I love especially looking back to previous eras where there was a scientific cusp; the Victorian times, the age of Jules Verne, Nikola Tesla and people making incredible advances and discoveries in science, medicine, exploration and so on.

“The public didn’t really know whether it was conjuring alchemy, or whether it was actually real and going to affect their lives. I mean, Nikola Tesla would do shows at Madison Square Garden and make sparks fly between electrodes and people would run for the exits because they thought it was demonic.”

Be the first to comment on "Thomas Dolby, past, present and especially future"