It was a bum rush up the aisle.

As I sat in my Section 200 seat during the Matchbox Twenty portion of the double headliner featuring the Goo Goo Dolls at Molson Amphitheatre on Thursday evening, a mustachioed man who seemed to be slightly lubricated tried unsuccessfully to talk security into allowing him access to the first section.

Vocalist Rob Thomas was just launching into the chorus of “3 a.m.” when the rebuffed man suddenly sunk to his knees, eyes closed, strummed an imaginary guitar while singing along at the top of his lungs, then just as quickly leapt to his feet, punching the air in approval and emitting a loud cheer. 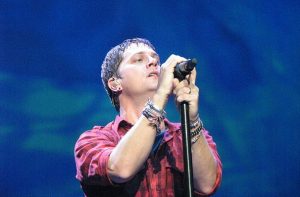 He was one of the 13,000 or so who took the Florida six-piece kings of adult pop rock up on Thomas’ earlier offer to allow Matchbox Twenty “to be the house band for your good times tonight.”

And while other audience reactions weren’t quite as wildly impromptu as ball cap guy’s, they certainly celebrated in their own ways, singing and dancing incessantly as hits like “Disease” (a song with a slight Latin feel that almost sounds like an outtake of Thomas’ earlier monster smash “Smooth” that he recorded with Santana), “Back 2 Good” and the current “She’s So Mean” — from the band’s latest opus North — were paraded in front of them.

Performing on a brightly lit tiered stage that featured three giant cubic video screens dangling above them, Matchbox Twenty were all about delivering the goods, not necessarily enhancing them. They didn’t want to mess too much with the radio-friendly love song arrangements that their audience, whose median age was in the 30 to 40-ish bracket, had acclimated to over the past 18 years, so they didn’t.

Their musicianship was solid, if not spectacular: guitarists Kyle Cook and Paul Doucette provided much of the onstage animation, and while Thomas isn’t the most charismatic of front men (although he gives good photo), he did sing superbly, whether it was the midtempo “Unwell” or the upbeat “Real World.”

And that’s exactly what the crowd wanted and expected.

Like Matchbox 20, Buffalo’s Goo Goo Dolls has become something of an adult radio pop phenomenon, although their humble beginnings were a little harder-edged.

And like Matchbox 20, the Goos, led by singer, guitarist and principal songwriter Johnny Rzeznik, relied more on the strength of the songs than their reliance on technology to deliver an entertaining 90-minute set.

Rzeznik was loose and affable, joking before performing one of the band’s big hits, “Name,” that “this song is so old even I have trouble remembering it.”

And when he flubbed the beginning to “Eyes Wide Open,” he confessed, “I never said I was a great guitar player. You want to see someone get all the notes right, go see John Mayer.”

As the trio, expanded to a five-piece for the tour, tore through a steady stream of numbers from their new Magnetic album, they built up a strong momentum that culminated in a pretty good musical climax with “Bringing On The Light,” “Stay With You” and “Iris,” the latter bringing the crowd to their feet for the first time during the night.

With a combined 27-song set, both The Goo Goo Dolls and Matchbox Twenty proved to be a good crowd-pleasing bargain.

Be the first to comment on "The Goo Goo Dolls and Matchbox Twenty know how to please: concert review"