The Regent Park School of Music has discovered that it’s nice to have a friend in high places – especially if that friend is named Taylor Swift.

It turns out that several Regent Park School of Music students between the ages of nine and 18 appear on the Nashville-based Swift’s latest album Lover, released last Friday: specifically on the sample loop that forms the backdrop of the song “It’s Nice To Have a Friend.” 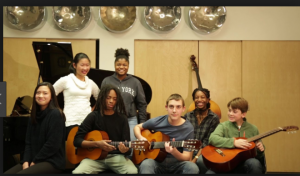 The Toronto connection responsible for the placement is a direct one:  homegrown superstar producer Frank Dukes, .a.k.a. Adam Sweeney, who co-wrote and co-produced three numbers on Lover, including album track 17 –  “It’s Nice to Have A Friend.”

Last December, at the behest of Rana Chatterjee, the associate director of creative agency BBDO Canada and a close friend of the producer, Dukes – who recently co-wrote and produced the Jonas Bros.’ comeback chart-topper “Sucker” and is on the speed dial of everyone from Drake and Post Malone to Camilla Cabello and Frank Ocean – spent three days at Regent Park  recording his own compositions as performed by students for an initiative for his Kingswood Music sampling library, an album called Parkscapes. 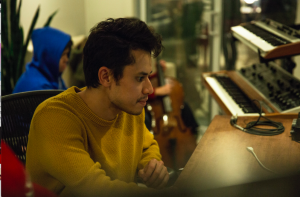 Licensing and publishing royalty proceeds from the use of any of the 11 Parkscapes songs as samples directly go towards funding the school’s music program – and the first major artist to take advantage of this enterprise is pop phenomenon Swift,  who has already sold two million copies of Lover around the world (including 1 million in pre-sales orders) since Friday.

In Swift’s case, not only did she sample the steel-pan-and-choral strains of “Summer In The South,” as the backdrop for “It’s Nice To Have a Friend,”  but also made an additional undisclosed donation to the program on the album’s day of release.

Not surprisingly, Richard Marsella, the executive director of the Regent Park School of Music, is exhilarated by this windfall.

“It’s a game changer for us,” he told the Star during a Monday morning phone interview.

“Having an artist like Taylor Swift – capturing her imagination with this project through Frank Dukes – who helped us work on these compositions back in December of last year – the whole thing is really exciting for us and our kids and what it represents for music in the community and in the country, really.”

Marsella said the school “had been hearing rumblings” over the past few months that Swift was contemplating sourcing the RPSM track for a song but kept it under wraps.

“We didn’t really want to talk about it in case it jinxed – you never know at the last minute if a song gets pulled or not,” Marsella said. “We only found that it was confirmed on Friday.”

As for some of the students involved with the project, hearing themselves on a Taylor Swift album has proved to be the thrill of a lifetime.

Thomass had received an e-mail from Marsella mentioning the potential of  being on a Swift album when the possibility was first raised.

“When I saw it, I got so excited. I never thought that one of the compositions could be used by such a big artist. It was amazing and incredible. As soon as I found out we could talk about it, I started telling all my friends and they were really excited. I thought it was an amazing project to become a part of.”

For Mywini, 17, who played guitar on “Summer In The South,” it’s an opportunity to bring some well-deserved attention to the RPSM program.

“Not only did we work on a first-rate project that was a really good thing for the community and the school, but Taylor Swift’s name will make it even bigger,” he notes.

Marsella says that his students will continue throughout the  school year to participate in similar sessions and projects like Parkscapes.

“That’s our sustainability model now,” Marsella explains, adding that the Regent Park School of Music is a registered charity dependent on fundraising to subsidize the music program.

“Every year we have to raise $2 million to give 1000 kids music education at a highly subsidized rate. We have 80 faculty that we pay and we buy the instruments for our kids. We pay for the Royal Conservatory exams for our kids. Our costs are real. So someone like Taylor Swift coming in and really believing in what we’re doing sets an example for what community music and community building can look like.

“That’s the inspiring thing to me – she’s leading by example.”

And apparently Swift’s contribution isn’t ending with the album track: she’s been  spreading the word about Regent Park in promotional interviews.