“Whoo-oo! Would you look at that?”

Pleased as punch, musician Stephen Fearing is leaning moon-eyed over an open case, cooing over his latest custom-built, flat-top, six-stringed guitar, its European Spruce surface kissed by the slightest toasted-sunburst finish and adorned with a mother-of-pearl replica of Fearing’s signature on its fingerboard.

Linda Manzer, the world-renown luthier who spent more than a year crafting the musician’s latest treasure, nervously hovers over his shoulder as he lifts the instrument from its case and gingerly  inspects it. 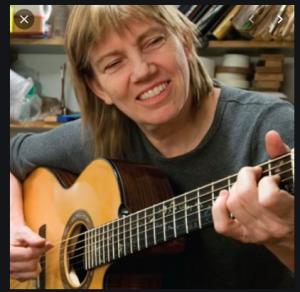 “It’s not as blonde as the other one,” he notes, referring to The Cowpoke, the first Manzer guitar he purchased after being introduced to her by Willie P. Bennett 30 years ago, and still plays today.

“But I love the smell of a brand new guitar. It’s got that lacquer smell.”

Fearing,  who releases his 13th album, The Unconquerable Past, on November 8, has been looking for a new guitar to potentially take on the road when he tours his album, and then joins Blackie & The Rodeo Kings for their 25th anniversary and new album tour in 2020.

The hours-old new addition, made possible by a late benefactor who bequeathed Fearing his own Manzer model, is the latest guitar built by a Toronto-born woman who has served as luthier for a number of luminaries ranging from Pat Metheny and Carlos Santana to Paul Simon and Gordon Lightfoot.

Linda Manzer guitars are known for their superb quality, durability and have even been displayed at the Smithsonian.

“It’s like going from a Ford to a Lamborghini,” Fearing explains. “There’s all this subtlety in them, and yet, you can hit them hard.  Her guitars can handle everything.

“Roy Forbes – Bim –  used to talk about a band in a box, which is the way you accompany yourself as a solo artist: try to create as many textures as you can with just a guitar.

“And that’s what Linda’s guitars are perfect for: a lot of bottom end, projecting and it doesn’t have a mid-rangy hump.”

And depending on the artist, Manzer instruments are frequently deployed on the road: when Bruce Cockburn plays solo at Koerner Hall on Oct 19 to promote his instrumental Crowing Ignites, his arsenal will include three of her guitars and a Manzer-built charango – a small Andean lute.

Occasionally, Pat Metheny will trot out his four-necked,  42-stringed Pikasso guitar on stage that Manzer invented for him back in 1984. More recently, she designed a 52-stringed, multi-necked guitar for fellow Canadian Terry Tufts and his project dedicated to the Group of Seven.

On this day of the Fearing guitar unveiling, surrounded in her Cabbagetown workshop by saws, buffers, guitars in various stages of completion and photos of celebrity clients, Linda Manzer is admittedly nervous, knowing that just because she’s finished a guitar doesn’t mean that Fearing will bond with it.

There are no guarantees.

“I hope I’ve connected with him,” she says. “Once you get the strings on it, there’s that moment where it comes alive. I have a certain amount of knowledge and understanding of it – it’s all natural woods and you’ve got 200 lbs of pressure where the neck is going to go under tension for the first time.

“I’s like a prima ballerina who has awoken first thing in the morning and it needs to stretch, and as he plays it today, it’s going to sound a lot different for the first few minutes than it will an hour later.  But hopefully I nailed it.”

It’s another feather in the cap for Manzer, who commutes between Cabbagetown and her coach house studio in Almonte, Ontario. Not bad for someone who started out as a self-described “failed folksinger” before attending Sheridan College for painting.

But it was while assembling a dulcimer from a kit during a woodworking class that she had her “aha” moment.

“It’s when I put the strings on it and it came to life – there was this magic where it stopped becoming an inanimate object and suddenly became alive,” Manzer recalls. “ And that suddenly sparked me. It’s one of the more exciting moments in my life, actually.”

Apprenticing under luthier Jean Larrivée for three-and-a-half years and later learning the craft of constructing arch-top guitars under James D’Aquisto, Manzer struck out on her own and sold one of her first guitars through Ring Music to Gordon Lightfoot.

Eventually she invented the innovative “Manzer wedge” which adjusted the size of the sides of the guitar to be thinner for better player visibility, one of her most practical designs.

“I’m slower and I take longer, because I think I do more,” she admits, but laments that the next generation of luthiers may not enjoy the same kind of access to prime quality wood due to clear-cutting, deforestation and other ecological destruction.

“You couldn’t  get half of the woods that I started with,” Manzer notes. “ When I started, people were using ivory on guitars and Brazilian Rosewood – both are at the highest level of endangered on  the CITES (The Convention on International Trade in Endangered Species of Wild Fauna and Flora) list.

“I wouldn’t use ivory because I’m against the principal of it, but Brazilian Rosewood- I have quite a large supply of it and it’s legal because I registered it.

“I’m lucky – I probably have a lifetime supply because I’ve been buying it for decades. New builders have to be really innovative and either use local woods or reclaimed woods.

“You certainly wouldn’t get the quality because you need super old trees and most of those have already been logged.”

Although she has decades of expertise under her belt, Manzer says there are particular challenges when building instruments that require razor-sharp focus.

“Finishing,” says Manzer. “When you first start making an instrument, you can be really rough with it – even drop it.

“But as you get closer to the end, you have to start being more physically careful around it. You have to be careful with the tools and be extremely delicate.”

She walks over to a buffer equipped with a cotton-covered wheel and grabs a guitar to simulate a demonstration, holding it a few inches below the spinning wheel.

“When the guitar is almost done, I turn this on – I push the guitar into that, but I’m holding it.  It can catch it and be ripped apart if I lose my concentration.

“It’s actually more stressful as you get closer to the end.”

Humidity is another concern.

“My shop in Almonte is hermetically sealed and I have air conditioners and humidifiers and de-humidifiers,” she explains. “ I keep it between a 40 and 45 humidity percentage.

“I let a guitar get too dry and I was standing at my work bench. I heard it snap and then there was this big crack down the top – which meant I had to replace the top. The back and sides don’t expand and contract a lot , but the top – because it’s so thin and soft and brittle, if it dries out, it’s got nowhere to go so it cracks.

“You have to build at a fairly good humidity , but not too wet or too dry so it has somewhere to go either way.”

Manzer, one of an estimated 50 to 100 female luthiers around the world plying their craft,  is currently building her 26th guitar for Pat Metheny, “a very, big loud acoustic arch-top.”

She says she still loves her job too much to even contemplate stopping and has a number of projects with fellow builders she is excited to embark on.

“I’m thinking I’m building the best stuff I’ve ever built, and I’m not tired or rich enough to retire,” Manzer states. “When I stop working, I stop making an income. And I love doing it and I’m healthy.

“I’ll probably slow down and be found slumped over my bench one night. That’s not a bad way to go.”