Companies use algorithms, math and even colors to chart a song’s potential for success

When Gnarls Barkley‘s “Crazy” enjoyed its chart-topping run in 2006, its blockbuster stature may have sounded like a foregone conclusion to some.

After all, the song had a whimsical feel, an easily digestible melody and a can’t-miss chorus that had no problem lodging itself in your memory’s instant recall. 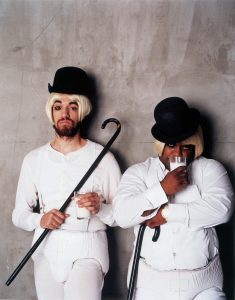 Using a cutting-edge technology called Music Xray that analyzes underlying mathematical patterns in music, New York City-based Platinum Blue determined that yes, “Crazy” had the potential to go all the way … and a smash was born.

For Mike McCready, who co-founded his company in December 2005 with marketing executive Tracie Reed, it was timely validation that Music Xray could be a useful and successful marketing tool to predict record company successes.

Platinum Blue isn’t the only company to use math as a method in forecasting public tastes.

But Platinum Blue and Music Intelligence Solutions, with its Hit Song Science technology, are the only two companies dedicated to the hit prediction business.

In an era when sales are suffering and access to reliable avenues of exposure like radio and television is becoming increasingly challenging, record labels and producers are turning to good old-fashioned arithmetic to help them take that calculated risk and beat the odds.

In the case of Platinum Blue’s Mike McCready (no relation to the Pearl Jam guitarist), it was inadvertently determining that successful hit records consist by and large of identifiable mathematical patterns.

“We made this discovery by accident when I was at my former company, Polyphonic HMI,” recalls McCready. “We were messing around with some technology so we could build a music search recommendation and discovery platform, and in the process of doing that, we were fingerprinting — or mathematically analyzing — these millions of songs.

“We had this application that would isolate and quantify — a sign on a mathematical curve — a number of characteristics of a song. So we could isolate melody, harmony, beat, tempo, rhythm, octave, pitch, chord progression, fullness of sound — about 30 of these traits.”

McCready went a step further, looking at different tunes that had been promoted as hit singles but underperformed in the market. He discovered further connections.

“What we noticed was that most of those songs, while they sounded and felt like hits, they didn’t conform to one of these patterns.”

It was all the evidence McCready needed.

“We figured out that having these optimal mathematical patterns seemed to be a necessary, but not sufficient, condition for having a hit song.

“So we started building a business around this, going to music labels and telling them, ‘Look, it’s not enough for the song to sound and feel like a hit or for it to be promoted effectively. But if, in addition to those two criteria, you have these optimal mathematical patterns, we think you can increase your hit rate to somewhere over 80 percent.'”

However, McCready acknowledges that Platinum Blue’s results are completely subject to the whims of his clientele.

“Not every recommendation we make to the major labels is followed,” says McCready. “We might say track three is the album song that conforms most to these patterns, but that track might not sound like a hit to the A&R guys, so they release another song, which invariably doesn’t work out.

McCready also says Platinum Blue can’t pinpoint exactly where a song will land on the charts.

“Once a song gets into the Top 30, it kind of takes on a life of its own and many other factors influence its success,” he explains.

Platinum Blue isn’t exclusive to labels. For $10, unsigned artists can also submit their songs for what McCready calls “a general indication as to whether or not their songs conform to these patterns.”

Once their song is analyzed, recipients receive a color-coded report that indicates whether the song has hit potential. Fall into the blue category, and you’ve got an above-average chance that the song will deliver a hit.

“That doesn’t mean that they sound like hits or that they would be promoted effectively, but if both conditions are true, that’s when you have about an 80-85 percent chance of that song providing a return on investment,” McCready asserts.

McCready also says that Platinum Blue can be used as a production litmus test to fix it in the mix.

“We can isolate each one of the attributes that we measure and we can tell the producer, ‘Look, we can’t give you any creative direction. We can’t tell you how to change this, but the problem seems to be in the bass line of this particular song,” he notes.

“So maybe the producer will just increase the decibel of the bass or muddy it up and give us three mixes.

“We’ll reanalyze and say, ‘Whatever you did on mix No. 3 — just do a little more of that and it looks like you’re into the hit cluster.'”

However, one song component that is eliminated from consideration is the lyrical content.

“The lyrics themselves are not being measured, so if the song is about something that’s socially inappropriate or the lyrics aren’t compelling, that can ruin a song,” says McCready.

“Although I guess there are plenty of ‘Ob-La-Di, Ob-La-Da’ examples where words really don’t matter too much.”

Be the first to comment on "Solving the Hit Record Equation"