Run-D.M.C., the rap pioneers from Hollis, Queens in New York, promise to keep it pure and simple Saturday night when they make a rare appearance at the University Of Waterloo’s Federation Hall.

“We’re not using any fancy costumes or big choreography or anything like that,” declares Darryl “D.M.C.” McDaniels over the phone yesterday from The Big Apple.

The 34-year-old McDaniels and pals Joseph “Run” Simmons and DJ Jason “Jam Master Jay” Mizell may not have released a record since 1993’s Down With The King, but they don’t really need to. Their place in rap history was assured the moment they brought the music to the mainstream. 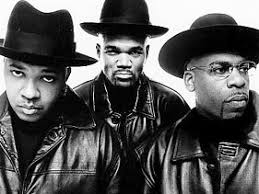 “We opened a lot of doors,” says McDaniels. “We were the first to earn a gold album (for Run-D.M.C. in 1984), a platinum record (for King Of Rock  in 1985) and multi-platinum (for Raising Hell  in 1986), and the first to appear on MTV. We’re just thankful we were able to build the foundation for rap and hip-hop culture.”

“We took the Adidas shoes and suits, the black hats, the gold chains, the fashions to America, Brazil, Japan, Australia — all over the world. And that started in our neighborhood!” he muses.

“But you know why rap is popular around the world? Whether they’re black or white or Chinese, rich or poor, everyone has the same problems: peer pressure, sex hang-ups, school problems, parents that are down on you.

Just as Run-D.M.C. cleared the path for later groups such as Wu-Tang Clan, A Tribe Called Quest, and many others, McDaniels respects the artists that came before the formation of his trio in 1981.

McDaniels says it was Run’s brother and eventual trio manager, Russell Simmons, who played an integral role in spreading the gospel.

“Russell Simmons would promote rap and hip-hop parties at the Youth Centre,” McDaniels recalls. “He’d hire a D.J., and everyone would bring their tape records, dupe the tapes, and sell them. The greatest influence on anybody at the time was the Cold Crush Brothers. Their tape was the hottest.

“The Funky Four Plus One was another one. Then there were all those Sugarhill acts. When Afrika recorded `Planet Rock’, which set off that whole Miami Bass movement, Run-D.M.C. delivered our messages with a Planet Rock type of beat. This was before rappers used samplers. The DJ scratched the vinyl and we rapped on the mics.”

Run-D.M.C. also gave Aerosmith a boost with its street credibility during the Boston rock band’s comeback when the two duetted on the rap remake of the classic “Walk This Way” at the suggestion of producer Rick Rubin.

“It was a smash,” recalls McDaniels. “But Aerosmith’s record company really wanted to distance the band from it. During the round of press interviews, reporters were specifically told not to ask Aerosmith questions about Run-D.M.C. or ‘Walk This Way.'”

McDaniels’ voice swells with pride as he notes how far rap music has progressed.

“I look at the top of the charts, and I see how rock, reggae and alternative rock usually involve some kind of hip-hop element,” he says. “They’re always using a sample of a rapper’s voice. I like the infiltration of hip-hop.”

Some of Run-D.M.C.’s peers have survived: L.L. Cool J., Heavy D. and KRS-One. But McDaniels is concerned that too much of today’s hip-hop has more image than substance.

“I hear a lot of clones,” says McDaniels. “I remember there was a time when there were different types of music. Public Enemy gave you black history. KRS-One promoted personal knowledge of one’s self, and Heavy D. gave you romantic relief.

Run-D.M.C. promises to “take it to the essence” with their next album, to be recorded in 1998.

“We’re going to take it back to what rap was before it became a big corporation,” McDaniels promises.

In the meantime, the trio will continue on its current schedule of averaging 140 concerts a year.

“We’ve been around for 15 years, and we represent the longevity of hip-hop,” McDaniels states. “We’ll be rappin’ til we’re 70.”