Nor can thousands of people who flocked to outdoor sheds the past couple of summers to see her share the stage with Styx and Steve Miller.

So why isn’t radio playing the music of Pat Benetar, especially when she’s recorded an album as strong as her latest, Innamorata? 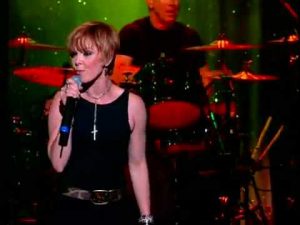 The Brooklyn-born Benatar knows the demand is there, but she says the decision-making regarding music playlists is brokered by radio consultants who deal with their clients at arm’s length.

“I did a couple of radio interviews and the DJs are as frustrated as everybody else, because they have no control at all over anything that gets played anymore,” explains the mother of two. “Even the program director’s hands are tied. The people who are pulling the strings have no concept of what’s going on out there. I think it’s very frustrating for everybody involved.

“I have a website (www.Benatar.com) that’s really active, and these people call stations constantly with requests and do everything that they possibly can. The DJs tell them, `We can’t do anything. It’s not up to us. It’s some guy in an office in a suit who’s got Nabisco sponsoring the show, so that’s where we’re at.’ But we have a 1,250,000 hits a month at our web site.

“The whole thing is that we just keep doing what we do, and eventually over the years they’re going to have to relent,” she laughs.

Her track record speaks for itself: four Grammies, 10 gold and multi-platinum albums. The classically-trained vocalist set the standard for female rock singers in the ’80s with a string of unforgettable hits like “Heartbreaker,””Hit Me With Your Best Shot,””Treat Me Right” and “Hell Is For Children” in the ’80s, establishing herself as a role model in the process.

This past summer, Benatar found some of that respect returned when she joined Sarah McLachlan‘s Lilith Fair for dates in Minneapolis and Milwaukee.

“Being with all those women was great!” exclaims Benatar, who plans to rejoin the 1998 caravan. “It’s probably the best 48 hours I’ve spent in the last 20 years.”

More recently, Benatar has contributed her hit “Love Is A Battlefield” to a four-CD collection called The Best Of The Great Ladies Of Song  that will benefit The National Alliance of Breast Cancer Organization and enhance awareness of the horrific disease.

“My mother’s a survivor, and I have a handful of friends that have been through it, or people close to them,” says Benatar. “Eleven years ago I had a biopsy that was negative. It was nothing, but just going through the trauma of that was unsettling. I knew how little education I had, and how big my fear factor was, and when they called and asked if they could put the track on, I said absolutely. It’s a good way to get the word out there and raise people’s awareness.”

The collection, which includes a wealth of high profile contributors ranging from Aretha Franklin and Sheryl  Crow to Patsy Cline and Marilyn Monroe, is available by calling 1-800-491-7504.

As for her Lulu’s set, Pat Benatar promises that her fans won’t be disappointed.

“It’s two hours long,” she explains. “I’ve spent the past three years playing for an hour, and I’m pretty sick of it, so I’m going to stay up there a while. We’re pulling out a lot of songs that we haven’t played in 15 years, obscure stuff, and of course all the big monsters that they want to hear. There’s a lot of stuff from Innamorata and there’s also a blues segment.”