Sure, a couple of encores stretched out the proceedings to just under 75 minutes, but the first 45 of them, which she spent showcasing the majority of her three 2010 Body Talk EPs, seemed more like a warm-up for a payoff that never quite materialized.

Sporting a blond bowl cut and dressed in a weirdly patterned pantsuit, Robyn Carlsson — returning to Toronto after a January sellout at the Sound Academy — spent most of her time trying to transform the new outdoor venue into a club under the stars. 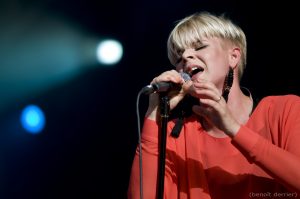 For the most part, the elfin singer succeeded.

She cajoled the crowd to join her as she danced uninhibitedly, twirling in circles like a whirling dervish to the throbbing synthesizers and thumping percussion being pumped out by the two electric drummers and two keyboardists flanking her on stage.

The audience became caught up in the infectious rhythms, throwing caution to the wind as strobe lights ruthlessly flashed bright colours.

The high-energy dance numbers and feverish tempos flowed relentlessly and seamlessly from one song to another, as Robyn gave herself an intense workout that would exhaust most aerobics instructors, breaking only briefly at the 35-minute mark to take a swig of water.

“We Dance to the Beat” and — from 2005’s self-titled album — “Cobrastyle” kept the crowd grooving in sync, but the concert escalated to a new height when Robyn launched into “Dancing on My Own,” a song about an embarrassed and heartbroken woman witnessing her romantic partner cheat on her with another.

Seems that one struck a chord with a lot of folks, and for a brief three or four minutes, the gigantic singalong indicated that the special sense of community among the 30-ish audience was at its peak.

Unfortunately, Robyn couldn’t maintain that level of momentum for the duration of the show, even when detouring into the arpeggio-dominant “Hang With Me” and the rocking groove of “U Should Know.” A ballad rendition of her hit “Show Me Love” ended the evening on a slightly subdued note. 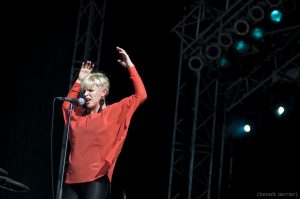 John “Diamond Rings” O’Regan demonstrated his prowess on keyboards, guitar and electric drums during his 30-minute one-man set, but if he wants to take himself to that next level, he needs a foil or an accomplice to free him from his solo restrictions.

However, his performance offered plenty of heart and ambition, even if his pitch occasionally wavered on songs like “You Oughta Know.”

British songwriter Natalia Kills declared her intentions right off the bat: “Toronto, my name is Natalia Kills and I’ve come to break your heart!”

She sort of did the opposite, possessing enough saucy self-mocking and camp on synthesized dance-pop anthems such as “Mirrors” and “Love Is a Suicide” that one got the feeling she’s going to be around for a while.

As for the venue, Echo Beach — in Ontario Place, just west of the Molson Amphitheatre — lives up to its name: there’s sand everywhere.

Equipped with a volleyball net near the back in case you’re bored with the acts, this is the rare venue where you can wander around drinking tallboys and indulge your nicotine habit.

Great sightlines and good sound are also positives. The negative? Long, long lines to wait for bathroom privileges, courtesy of a number of johnny-on-the-spots.

Just make sure you bring sandals, a blanket and a jacket for those cooler evenings.

Be the first to comment on "Robyn opens venue in style"