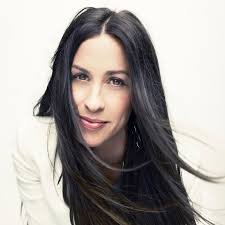 Thanks to her volatile 1995 multiple-Grammy-winning masterpiece Jagged Little Pill, Ottawa-born Alanis Morissette will always be remembered and associated as the young woman who gave what-for to an ex, spawning a host of copycat singers (Meredith Brooks, Tracy Bonham) who suddenly felt safe to vent their own frustrations to a receptive audience and striking enough of a public chord to sell more than 33 million copies of the album around the world.

While Morissette’s albums Pill, So-Called Chaos and Flavors Of Entanglement have largely been inspired by the ups-and-downs of her romantic life, she returns August 28 with Havoc And Bright Lights, her first work since marrying rapper Mario “MC Souleye” Treadway in 2010 and giving birth to their son Ever Imre on Christmas Day that year.

There’s another big transition: this is Morissette’s first U.S. album outside Madonna’s former Maverick imprint, and she’s licensing it out territory-by-territory.   Grammy.com caught up with the seven-time Grammy winner during a recent promotional stop in Toronto.

You captured four Grammy Awards in 1995 for Jagged Little Pill and by proxy, “You Oughtta Know,” for Album Of The Year, Best Rock Album, Best Female Rock Vocal Performance and Best Rock Song. What do you remember about that evening?

I was a little bit of a deer in the headlights during that evening. I just remember having this inner conflict of my ego being so gratified and feeling very grateful for being recognized in that way, and God Bless Glen Ballard (album producer) for being bowed-down-to: It was so lovely for me to behold. And at the same time, the idea of competition in arts to me is sacrilege. So I was up there going, “Thank you, I think, and I’m sorry, and wait a minute, I am grateful, and what am I doing here?” There was a lot of inner conflict around that time, and to this day, the idea of competition in any art form seems kind of silly. It’s like comparing oranges with yellow.

Many artists have not been able to reinvent themselves as completely and successfully as you did when you transitioned from pre-L.A. Canadian dance pop diva to expressing your own voice with Jagged Little Pill.

For me, it was just adding what was already there, but was dormant in terms of public perception. As a kid I’d listened to Etta James and Aretha Franklin and Heavy D and hip hop music, and a lot of technological music. And I listened to what a lot of what my parents listened to —  Leonard Cohen, Bob Dylan – so for me it was this combination of loving hooks, loving technology and loving rocking out, sweat. As a teenager, I was working with Leslie Howe, so (pop) was the focus then, and the autobiographical aspect of writing songs was not something I was encouraged to do during that time — in fact, quite the opposite.

So when I emancipated myself as such and moved to Los Angeles, I just knew I wouldn’t stop until I was writing songs that felt really authentic to what was going on at the time.

Your new album, Havoc and Bright Lights comes after experiencing the profound life changes of marriage and motherhood.  Did parenthood impact your songwriting?

It just meant that I drank a lot of coffee. I didn’t use to drink coffee because I would have anxiety attacks from it, and it just became this imperative drinking. And I was sleep-deprived.  I still am. So instead of having three hours to just commune and write and be introspective, I had three-and-a-half minutes, so everything became very concentrated. The writing process was always pretty accelerated process to begin with, but I relied on it. And then, it just became the 17th priority – after marriage, family, and friends – and then living the serviceable vocation that I was born to live.

You’re licensing your work to different labels in different territories – Columbia and Sony in the U.S., Universal Music Canada north of the border. Why?

It’s kind of like dating: I wouldn’t want to date someone who didn’t want to be on a date with me (laughs).  I want to date someone who’s courting me madly. So the other aspect of this that is really exciting for me is that it’s a whole new paradigm of partnership: win-win.  The old antiquated system was 80% record company, 20% artist, and any artist who complained about that was just going to be seen as an ingrate. We were caught between a rock and a hard place; whereas now, it’s a one-record-cycle deal – if everybody’s winning, let’s continue. Win-win or no deal: That’s really what it’s become all around the world. So I actually feel real partnership for the first time, and I think that’s the new frontier. Partnership is the way. Dictatorial win-lose is so old school.

What excites you most about the future?

What I’m excited about is the idea of having some constancy. So, as opposed to the old school, writing a record, touring it, falling into a deep depression, writing it, touring it, falling…I think the new cycle will just be staying consistent on the social networks and writing articles – I’ve been really enjoying writing articles – and writing music and music for movies. I’m writing a book for next year that I’ve been talking about since 1999 and I don’t want to hear my voice talking about it anymore. So I’ll finish that next year and it touches on all the topics I care about. So really, just to be active in the conversation of evolution and women’s issues. Sign me up.

Be the first to comment on "Q&A – Alanis Morissette"