Jim James is a man possessed.

Not that the My Morning Jacket front man and songwriter wants to be exorcized of his musical demons anytime soon, but he clearly relishes the opportunity to get in front of a crowd and lose himself in the sonic waves of his sweeping epics.

That certainly was the case last night at Toronto’s Echo Beach, the sandy Ontario Place home venue of the $15.50 tall-boy brewskis and pulled pork burritos, where James and his Louisville sluggers — impressive multi-instrumentalist Carl Broemel, bassist Tom Blankenship, drummer Patrick Hallahan, keyboardist Bo Koster and their poncho-laden stuffed bear mascot — decimated the estimated crowd of 5,000 with a fiery and intense two-hour barrage of rock, reggae and country, complemented by a psychedelic light show that would have made Dark Side Of The Moon-era Pink Floyd proud.

OK, the onstage bruin really didn’t contribute much to the calamity, but James more than compensated on his behalf, working himself into a physical frenzy as he squeezed notes out of his guitar using all manners of body contortion.

But that’s Jim James for you: he’s one of those players that as soon as he plugs in, he becomes a conduit for whatever musical wattage zaps through him, responding to the point where you can almost see the melody physically popping his veins. It’s a compelling sight to follow him around the stage, whether he’s rocking his torso to and fro to Circuital’s “Outta My System” — while wearing a cape, his long mane of wavy hair concealing his face — or executing leg kicks during It Still Moves’ “Run Thru,” inexplicably adorned with a piece of black cloth placed on his head and carrying a large sampler around his neck.
No less compelling were the arrangements, chosen by the fans in conjunction with the band’s “spontaneous curation” idea that lets the patrons determine each night’s set list, 19 songs being Toronto’s magic number. 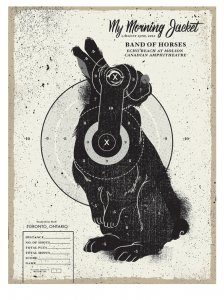 “Master Plan” began slowly and was built into an ecstatic showdown between different musicians, ending when James jumped on drummer Hallahan’s riser and goaded him to an explosive finish.
My Morning Jacket injected much-needed dynamics during several points in the show, both soft (the acoustic-driven “Golden” was bolstered from the cameo harmony of Kathleen Edwards) and stylistic (the reggae bliss of “Off the Record”), but the band seemed extraordinarily in tune with their leader, reading and adjusting with clairvoyant efficiency.

It was a grand display of showmanship that hopefully taught opening act Band Of Horses a bit about the art of performance. If rock revved My Morning Jacket’s motor, it cooled Band of Horses’ engines.

But observing them for the first 50 minutes of their show was akin to watching paint dry. 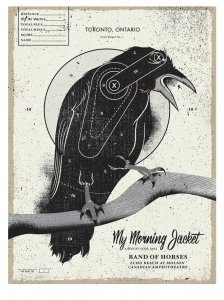 Bridwell and company didn’t really loosen up until “The Funeral” — their 11th song of the 12-song-set — finally exhibiting signs of life separate from the cardboard presence of their previous songs.
If they had shown a little more urgency, and tackled their originals with the same panache as they did for their soulful cover of “Am I a Good Man,” the crowd would have been a little more entranced.
Instead, Band Of Horses needs to look to My Morning Jacket for a clue on how to rock it outta their system.