The Grammy Winner got in 12 songs from her new album Little Broken Hearts but seemed most at home playing country standards.

Ever since she exploded onto the mainstream pop scene with her jazzy multiple Grammy-winning album Come Away With Me, Norah Jones has been doing her utmost to shatter perceptions. 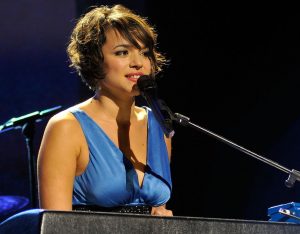 The sultry daughter of Ravi Shankar has been indulging in a number of extracurricular musical hookups ranging from her country-driven side project The Little Willies to the surprising album of standards put out by Seth MacFarlane, the creator of Family Guy and Ted.

Jones’ latest effort, … Little Broken Hearts, is another artistic stretch, co-written and produced with Brian “Danger Mouse” Burton and filled with ambient flourishes, a stylistic move that the New York native was eager to flaunt before a sold-out Massey Hall crowd on Friday night, as she front-loaded a healthy dollop of the 12-song album during her musically solid, but personality-muted, 95-minute show.

Playing against a big curtain backdrop and a somewhat interesting set that include different sizes of origami paper birds interspersed with hanging lights, Jones stepped out on stage with her precision-driven four piece band, waved and promptly set into three note-for-note renditions of “Broken Hearts” songs: “Good Morning,” “Say Goodbye” and “Take It Back.”

As the concert progressed, it was here that people discovered three things about Jones: she’s a sublime musician, skilled not only on the piano but on guitars electric and acoustic; she has a fairly stunning voice, full in richness but somewhat limited in range and dynamic; and although she’s certainly attractive, there’s a surprising absence of charisma for someone who has been at it for 10 years and sold more than 30 million albums.

Nor was there a lot of personal engagement with the audience; a shame, considering … Little Broken Hearts is a second collection of cloudy Jones breakup songs that there probably have been some good stories behind them.

Particularly disarming was the eerily sweet new ballad “Miriam,” which prompts a jilted Jezebel to plot her nemesis’s murder and “take out her eyes.” Sung so beautifully by Jones at the acoustic piano as paper birds were suspended in mid-air made for the show’s most psychotic moment, so a bit of a narrative would have scored extra points with the crowd.

While the new stuff was comparatively fresh territory for Jones, the real magic occurred when she returned to her comfort zone. And that comfort zone — more so than either jazz-inflected classics like “Don’t Know Why” or “The Nearness of You,” which she performed solo on piano — is country music.
The fact that her voice embraces so many styles effortlessly and authentically may be her greatest gift, but it seems country music is the home where she can put up her feet, relax and dazzle crowds so impressively.

Her performances resonated when she added a bit of a bounce to the Hank Williams classic “Cold Cold Heart,” gave the high lonesome approach to the Grateful Dead’s “It Must Have Been the Roses” or delivered a twang-free “Lonestar.” That’s when she looked like she was having the most fun.

Even when she performed the encores of “Sunrise” and “Come Away With Me,” Grand Ole Opry-style, with her band huddled around her, sharing a single microphone, the mood was different.

But then it ended almost as suddenly as it began, and the standing ovation at the end of the night came across more as the applause of politeness than that of enthusiasm, signalling the crowd came away from her show less than bowled over.