Well into their sixties, veteran rockers deliver the goods – with fewer gymnastics.

The last time they were at the Air Canada Centre — August 17, 2010 to be exact — Aerosmith guitarist Joe Perry knocked singer Steven Tyler offstage and into the crowd to retaliate for Tyler accidentally hitting him in the head with his microphone a few days earlier.

There was no such tomfoolery last night at the ACC, where the Beantown rockers returned to the city in front of a packed house for their Global Warming Tour, and to preview a couple of tracks for their new November-due album Music From Another Dimension. 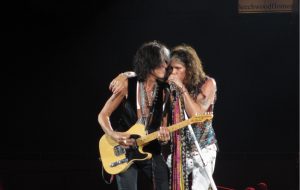 In fact, from the moment Tyler and Perry emerged together from beneath the T-shaped stage about halfway down the ramp for the opening strains of “Draw The Line” — Tyler wearing a top hat, sunglasses, shirt and leather pants; Perry adorned in a glittery gold jacket and glittery black shoes — the duelling rock stars made it clear the next two hours would be nothing short of a love-in.

As they spun through a 20-song set list that dated as far back as 1973’s Aerosmith and touched upon the quintet’s glory MTV years, Tyler praised his guitarist and draped his arm around him so frequently you’d think the two were going steady.

“This is the only man I live for on this stage, Mr. Joe (expletive) Perry,” Tyler yelled at one point before Perry showed off some of his guitar chops, and on another occasion threatened to bow down before him to hail his greatness.

Tyler’s reverence may have been merited, because Perry played his licks like a house on fire, though much of the nuances were unfortunately lost in a static sound mix that plagued the band the entire night.

And at 64, Tyler was no slouch himself. Although he no longer indulges in the athletic back flips and cartwheels that helped resurrect the band into a must-see concert attraction in the late ’80s, he remained agile, executing his trademark jumps and shuffles and working every part of the stage, his pipes still able to range from normal to scream. 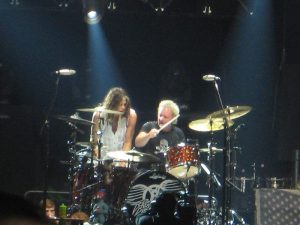 This wasn’t a routine performance either, with Tyler, Perry and the rest of the originals — unsung guitarist Brad Whitford, bassist Tom Hamilton and drummer Joey Kramer, plus a couple of female singers, keyboardist Russ Irwin and Kramer’s son Jesse on percussion — keeping their energetic sound tight, disciplined and magical.

Along with such well-worn earworms as “Love in an Elevator,” “Rag Doll,” “Sweet Emotion,” “Walk This Way” and the mushy Diane Warren-written ballad “I Don’t Want to Miss a Thing,” Aerosmith also reached into the archives for the semi-obscure “No More No More” and “Last Child.”

The newer songs, “Oh Yeah” — kind of a semi-soul throwaway — and “Legendary Child,” a boogie rocker with a decent riff that dates back to the Rocks/Draw The Line era — weren’t terribly impressive.

It didn’t matter. By the time they wrapped with the one-two nostalgic punch of “Dream On” and “Train Kept A-Rollin,’ ” their ear-bled, adoring fans were smiling due to a band that had managed to defy the aging process, again.