Mike Wanchic, guitarist and co-producer in the Indiana singer and composer’s band since 1978, said he was astonished he received a phone call from his boss to head back into the studio within months of completing his last album, Human Wheels, released last year. 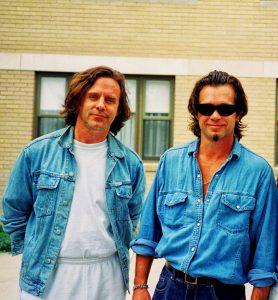 “Human Wheels  was a big, lush record — and it didn’t do what we thought it would,” recalls Wanchic, 42, who resides in Indiana a stone’s throw from Mellencamp’s pad. “Dance Naked was a direct, quick response. We wanted to record these songs and hold them up with absolute minimum instrumentation.”

Currently on a 40-date summer tour that will end as they head into the studio to record yet another album, Wanchic took some time out in Bridgehampton, New York to answer questions about his relationship with Mellencamp.

“I met him in 1976,” recalls Wanchic. “I was apprenticing as an engineer at Jack Gilfoy‘s studio in Bloomington. Gilfoy was a drummer with Henry Mancini, and John made his very first demo there, took it to New York, and came home with a record deal.”

The deal was with MCA, and Mellencamp — who went under the pseudonym of Cougar until 1984 — hired Wanchic to replace the original guitar parts recorded earlier in the day for the first album.

“We’d get together after midnight and I’d replace those parts,” says Wanchic. “He didn’t want to hurt his friend. But I could tell then that he had something special.”

Wanchic joined the band in 1978, and after three albums and a lot of bad press due to Mellencamp’s chippy behavior, scored their first #1 hit with “Jack And Diane.”

“He didn’t want to put ‘Jack And Diane’ on American Fool,” remembers Wanchic. “He hated it. I remember it was the first time we used a Linn drum machine. It was lent to us by Maurice Gibb. We worked very hard on getting everything just right. Finally, we persuaded him to put it on, but not without a lot of resistance.”

Wanchic said the same problem occurred with “R.O.C.K. In the U.S.A.” on 1982’s coming-of-age record Scarecrow.

“It was a very serious period for John as a writer,” he recalls. “He had his political awakening — his involvement with Farm-Aid, because John’s brother-in-law was a farmer who had lost his property. He didn’t think there was any room for something as flippant as a ‘R.O.C.K. In The U.S.A.’ With the exception of ‘Wild Night,’ which has the potential to be a #1 hit, ‘Jack’, ‘Rock’ and ‘Hurts So Good’ were our three strongest chart positions.”

Wanchic describes his working relationship with Mellencamp as “a good symbiotic one.”

“I have a slightly more conservative nature, while John is the risk taker. I’m the one who brings him back to earth a bit. The album’s concept usually starts with John. He has a good idea of what he wants an album to sound like. The production trick is sticking to your guns and not balking — having the courage to stay right there and see it through.”

“If you notice, most of the tracks on Dance Naked don’t even use bass — just a finely tuned bass drum,” says Wanchic. “You can’t make the same record twice.”

The duo also recruited rap poetess and bass player Me’Shell Ndegeocello through the recommendation Billboard Managing Editor Timothy White to guest as a duet partner on “Wild Night,’ and also hired former Jason & The Scorchers guitarist Andy York to shake the sound up a bit.

Wanchic — whose favorite Mellencamp albums are The Lonesome Jubilee, Uh-Huh and Big Daddy — has been involved in production chores of his own. He recorded Sue Medley‘s first two albums, and has just finished another Vancouverite’s latest album, country singer Patricia Conroy.

But don’t expect him to step in front of the microphone any time soon.

“No, there’ll be no solo record from me,” states Wanchic. “It’s just not my style.”