He’s played in volcanic caves on The Canary Islands and recorded one of his four solo albums during a press conference at The London Zoo’s Aquarium, but Michael Brook says a gig he performed in the late ’80s with visionary keyboardist Brian Eno topped them all.

“We performed at the opening of a Shinto temple in Japan,” Brook states over the phone from San Francisco. “It was all made of out softwood, which lasts 500 years before they have to rebuild it and reconsecrate the grounds. This concert was part of the ceremony.

The stage was made of either spruce or soft pine. I remember the show being a strange mixture of a festival vibe coupled with a sacred religious vibe. It was an unexpected and unusual combination of those two things: a very serious church ceremony and pop band paraphernalia.”

If the name Michael Brook still isn’t ringing any bells, don’t be alarmed. The Toronto-born musician, recording artist, engineer, producer and inventor has spent most of the last two decades of his 45 years toiling outside Canada, exploring the exotic world of ethnic music. 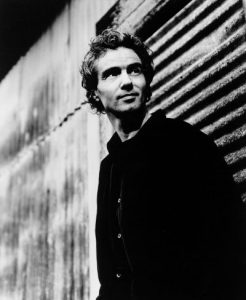 Although he’s recorded with Brian Eno and Bryan Ferry, collaborated with U2‘s Edge and David Sylvian, and produced Canadian artists Jane Siberry and Mary Margaret O’Hara, Brook has carved his niche away from mainstream attention. Not one to shy away from new frontiers, Brook’s stellar reputation in world music circles comes from working with such musicians as Qawwali superstar Nusrat Fateh Ali Khan and Indian electric mandolinist U Srivinas.

In fact, Brook and Khan are nominated in this year’s Grammy category of Best World Music Album for Night Song, released in 1996 on Peter Gabriel‘s Real World label.

“I really like ornamentation and passion, which are a big part of Eastern music,” says Brook, who will attend the Grammy ceremony at Madison Square Garden on February 26.

“I like the way they bend their notes, and I like drones. I don’t have a strong harmonic sense. I’m one of those people who can’t figure out jazz.”

“There’s also a lot of attention paid on how you go from one note to the next. There’s a lot of introspection, a meditative feeling. There’s a visceral passion that’s not as present in Western Music,” he concludes. 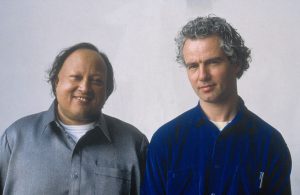 Although he’s hopeful of a victory, he’s not sure winning a Grammy will bring mass acceptance.

“It’s kind of a music taste,”Brook admits, “The Whitney Houston crowd is never going to like it. A lot of people are fussing about it, so that’s nice.”

Brook wrote the film’s score, save for an updated version of the KOEHLER & ARLEN jazz standard “Ill Wind,” a duet between R.E.M.’s MICHAEL STIPE and blues singer JIMMY SCOTT.

The album is scheduled for release on February 25.

Although Brook previously worked with Edge on the soundtrack to Captive, the film that introduced Sinead O’Connor back in 1986 — and scored the IMAX documentary Fires Of Kuwait, and licensed some of the tracks off his 1992 ambient album Cobalt Blue  to filmmaker Michael Mann for use in the movie Heat, Albino Alligator  marks his first solo score, an experience he tags “fantastic.”

“The time schedules they work on are quite surreal. You only have a few weeks, but it’s the first time I’ve only had to please an audience of one, which is the director. You take your own ego out of the loop, and you don’t agonize over whether something is right.

“It’s interesting to work with people who rely exclusively on emotional impact. All other considerations are irrelevant. They don’t care whether it’s in time or in tune. It’s all based on whether or not it’s right for the scene.”

Brook had an inkling exotic atmospheric soundscapes might be in his future when he relocated to Chinatown after growing up in the Beaches.

“In my very first band, we used to do this thing based on Indian music. I always liked drums and bottleneck guitar.”

Future Brook endeavors included stints in new wave band Flivva, The Hummer Sisters and toured with Martha And The Muffins. In the ’70s, he studied music at York University, and engineered visiting composer and trumpeter Jon Hassell‘s Vernal Equinox  album.

In the ’80s, while administering the A Space video lab, he toured with Hassell, met Eno and in 1983 accidentally invented The Infinite Guitar, used by U2 during the introduction of their mammoth Joshua Tree hit “With Or Without You.”

“There’s a similar device called an E-Bow, which stands for electronic bow,” Brook recalls. “I had started to record my first solo album, and I sent away for an E-Bow. The company lost my order, so I began fooling around and came up with it. Then the E-Bow arrived, and I found it inferior to the Infinite Guitar.

“The Infinite Guitar gives a guitar an infinite sustain. It’s as though you were standing beside a very loud amplifier. When you play the guitar, it sounds like a very high violin or a horn when you fret the string.”

Only three such guitars exist in the world, owned by Brook, producer Daniel Lanois and Dave Evans, better known as U2’s Edge.

“With Or Without You” may be the closest he’s come to mainstream success, but Michael Brook says he makes a comfortable living reaping his own rewards.

“A friend of mine once said you get paid in three different ways: One is money, two is the recognition of your peers, and the third is what you learn and the enjoyment of doing it.”