Adam Levine and Maroon 5 thrilled the ACC Tuesday night with a show that had 18,000 fans singing and dancing along with their infectious hits.

By: Nick Krewen Special to The Star Published on Tue Feb 19 2013

If your name is Adam Levine, you’re living a rather charmed life these days.

You’re a month shy of your 34th birthday, your current girlfriend is a Victoria’s Secret model (as was your last one) and you’ve just released your first fragrance. You were recently praised for a stint on the highly acclaimed FX TV series American Horror Story: Asylum and you’re bagging a few million as a judge on the NBC reality talent show The Voice.

You’re about to graduate to a tertiary career on the silver screen whenever the Mark Ruffalo–Keira Knightley film Can A Song Save Your Life? is released. And you also run your own label, 222 Records, that includes Mr. Shue from Glee on your roster. 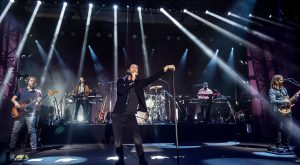 Oh, and your triple Grammy-winning band, which is largely responsible for enabling you to receive the attention and subsequent payoff of all these other gigs, can’t stop cranking chart-topping hits out of its wazoo, among them “One More Night,” the song that tied Carly Rae Jepsen’s impossibly infectious “Call Me Maybe” for the longest stretch at No. 1 last summer with a nine-week run on Billboard.

And judging by the rapturous response delivered Tuesday night by the XX-chromosome-dominant, 18,000-strong leather-lunged harmony singers who filled the Air Canada Centre to watch Maroon 5 coast through their hits, Levine’s good fortunes aren’t about to change any time soon.

Actually, “coast” is a pretty unfair and inaccurate description. From the opening strains of “Payphone,” their latest hit from their latest album Overexposed, as Levine stretched the elastic of his vocal cords to a stratospheric falsetto, it was clear he and his five-piece band were working their collective derrières off to entertain the crowd.

Holding court on a gigantic M-shaped stage, the Los Angeles quintet went for the jugular from note one, even offering a videotaped Wiz Khalifa cameo during the number before seguing into “Make Me Wonder” and producing the gigantic glitter balls that accentuated the sextet’s stylistic Jekyll/Hyde dichotomy between disco-driven pop and guitar-powered rock.

Then, without a second to spare, it was onto the lasers and Overexposed’s “Lucky Strike,” as Levine — dressed head to toe in black — worked both sides of the stage with the same amount of zeal he employed when Maroon 5 whipped Train’s butt during their last Toronto appearance in summer 2011.

There were a few unexpected twists. Maroon 5’s reggae-dub version of “One Night Only” took the crowd by surprise, as did a duet appearance by singer Rozzi Crane — an Adam Levine protégé no less — for “Wake-Up Call.”

Not only did the audience lap it up, but they responded in kind, deliriously singing and dancing along to Maroon 5’s infectious hooks, beats and melodies while Levine continued to explore the conflicted emotions of romance with his relatable lyrics.

They waved their arms to and fro through “This Love” and cheered as he finished the song with a stormy guitar solo; swooned through the delicate acoustic strains of “She Will Be Loved” as he took to a mini-stage in the middle of the arena, and partied to the rollicking rhythms of “Moves Like Jagger” as if their lives depended on it.

By the time the final notes of the 90-minute show subsided, the crowd was even more deeply infatuated with the limber Maroon 5 showman, thanks to one of this year’s more entertaining concerts.

So yeah, it sucks to be Adam Levine these days.

My heart bleeds for him.

Be the first to comment on "Maroon 5 thrills the ACC: concert review"