As a person who was born with synesthesia – defined by Wikipedia as “a perceptual phenomenon in which stimulation of one sensory or cognitive pathway leads to automatic, involuntary experiences in a second sensory or cognitive pathway”  – the 25-year-old singer and songwriter from Easton, Maryland known for such hits as “Alaska,” “Light On” and “Burning” says it deeply impacts her artistry to the point where she creates “mood boards” to help her write .

“It’s a really powerful force for how I think and write and hear music,” states Rogers, squeezing in 15 minutes on the phone late Friday afternoon prior to a performance in Portland, Maine.

“The most powerful way it comes into being is when I’m doing sort of a creative session – whether it’s stage and lighting or costuming  or when I make kind of music – and I have a mood board.

“I have a collection of boards and I think about the colours, textures and tones I’m being drawn to. (Synesthesia) doesn’t impede my vision but there’s a really, really strong association.”

As the cycle behind her 2018 album Heard It In A Past Life nears the finishing gate in November with appearances at the Miami Pop Music Festival – she plays her fourth Toronto date in seven months with a sold-out July 31 Echo Beach appearance – Rogers says she’s been writing a few tunes while on the road, but without the boards.

“I’ve started writing songs for the next record on piano and guitar, but it’s just really sparse. I haven’t made up a board yet because I still haven’t figured out how I want the songs to sound.” 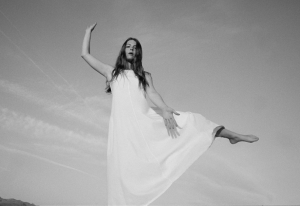 It’s a process that has served her in good stead over the years, helping forge a unique sound and songcraft that drew praise from no less than Pharrell Williams, who heard Rogers’ “Alaska” during a 2016 Masterclass she attended at New York University’s Clive Davis Institute of Recorded Music and exclaimed “Wow” at the number’s conclusion. The viral effect of the Masterclass video on YouTube – currently at 3.5 million views – helped launch Rogers’ mainstream career.

Prior to the Williams encounter, Rogers had considered the banjo her primary instrument and released two independent folk albums. But a visit to a Berlin dance club had opened her horizons to adding grooves to her music, something she incorporated into her 2017 EP Now That The Light Is Fading.

“I just really love house music, “ she declares. “The reason I’m drawn to folk harmonies and folk music is because it feels like a primal form of expression. I think I was having a moment of experiencing dance music for the first time, because the culture around it is so accessible and welcoming. It didn’t feel that way in the way I knew it in New York because there was so much money and sexism around the ways in which these higher-end clubs operated.

“But Berlin felt really accessible and really about dancing and about community and I was really inspired to write rhythms.

“It wasn’t something that I really didn’t pay attention to, because I’m such a creature of melody and I had already mastered this one element of music. You have to find ways to keep challenging yourself.”

One of the key catalysts in Rogers life was a trip of reflection she made to Alaska in 2013 to sort out her headspace at the time. It eventually led to Now That the Light Is Fading, and the inclusion of two of those songs on Heard It In a Past Life.

But Rogers says Heard It…shouldn’t be misconstrued as an album that looks into the past.

“I wrote and recorded and produced this record in about four months from January to April of 2018,” Rogers explains. “There wasn’t a ton of time or reflection for this record, either; it was more of a product of needing to keep moving.

“The EP itself had a lot of reflection put into it because I suffered from a couple of years of writers’ block before I started making it. So it’s been very much re-getting the ball rolling over these past couple of years, aside from taking a hiatus of a year or two from writing in college.”

However, location does play an important role when it comes to her songwriting.

“Space is really important to me. When I write a song, I obviously write a setting and go into particular details of the time and place of what is happening and what I’m feeling.

“Geography has been really important for me just to find – some of this record I made at my parents’ house in Maryland; a little was made in L.A. I’m in the process of figuring out what the vibe of the next record will be and where I want to settle to make it.”

The EP also contains several samples of nature sounds – the “keyboard’ sample on “Alaska” is actually of a mourning dove – and Rogers feels it’s led to a bit of a misperception about her as well.

“The nature stuff was sort of a way to combat my writer’s block. I sort of took on the sound samples to make dance music human in this way, but it’s something I moved away from. I think sometimes you just need a box to be creative with.

“As far as nature goes, it’s definitely a place where I feel calm and inspired, but I think it’s important to note that a lot of people through life peg me as “nature folk girl.” The reality is I make pop music and I lived in New York City for six years. So for me, I think it’s equally about the duality of the two, and the ways in which both of those spaces are a big part of who I am and how I make music.”

Rogers says she’s proud of the dozen songs on Heard It In A Past Life and says it’s “an honour to have this music that I’ve made be a soundtrack in any part of someone’s life,” but says the journey of working the album has given her a new mandate to recharge for the future.

“The biggest goal that I have coming off of this first lap and freshman experience is that the most important thing to me is a holistic lifestyle – and I’m going to work really hard and try and create that.”