For a woman whose single “Royals” is the most popular song in North America, 16-year-old Ella Yelich-O’Connor didn’t act like the centre of attention.

Making her Canadian debut at the Danforth Music Hall Sunday night, New Zealand teenage sensation Lorde revealed how she is shepherding her way to stardom.

For a woman whose first single “Royals” is currently the most popular song in North America – it truncated the two-week chart-topping momentum of Miley Cyrus’ “Wrecking Ball” by replacing the twerker at the plateau of the Billboard Hot 100 this week – 16-year-old Ella Yelich-O’Connor acted like she was anything but the centre of attention.

In fact, for the hour and dozen or so songs for which she occupied the Music Hall stage, the lighting was kept minimal, serving up a slice of darkness with her poetic prose and refreshingly resorting to artsy rather than obvious for her overall show. Only a trio of giant colour-shuffling spotlights positioned behind her, and an occasional sidestage beam of ochre light, illuminated the stage enough so you could see Lorde and the brunette locks that flowed almost to her waist (and that she had to repeatedly pull away from her face), or the two band mates that flanked her five-foot frame – keyboardist on her right, drummer on her left. 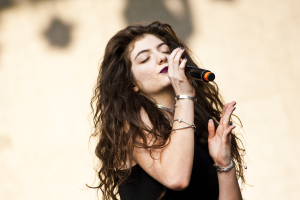 It was definitely a mood setter as Lorde commenced with “Bravado,” a track from this spring’s The Love Club EP. Lorde’s smoky alto (heavily aided by pre-recorded harmonies) flowed over the thick synthesizer pedal tones and tribal rhythms that powered the tune.

Draped in a black dress, Lorde jerked her body to the beats, twisting her torso as the spirit moved her.
After the repetitive groove of “Biting Down” became the closest thing all night to an underground dance number, Lorde turned to her new album, Pure Heroine, for faithful takes on “Glory and Gore,” and “Tennis Court:” more smart observations rendered under spacious tones and rhythms cut by her smoldering voice and, in place, pre-recorded harmonies.

As for the adulation, Lorde seemed rather bemused at being the centre of any attention, smirking incredulously at the ear-piercing, hysterical screams being hurled at her by a gaggle of excitable female admirers at several junctures of this all-ages show.

And that’s one of the things that makes her so appealing: she had the smarts to focus on the music rather than personality, and writes poetic lyrics that are deeper than the superficial claptrap and puppy-love declarations spewed by many acts who were launched when they were in Lorde’s age range as contrivances to cash in on their cuteness (Bieber, Britney, Cyrus and their ilk.)

A mature vision and the ownership of that vision is what separates Lorde from the pack, sporting an astute wit that’s already been embraced publicly with the ascendance of “Royals,” a tune that was harmonized by the nearly packed Danforth Music Hall house about 45 minutes into the show.

It’s safe to assume that if Lorde continues down the path of non-compromise and doesn’t succumb to turning into a “Royal” herself, this Aucklander could be as influential to her generation as a Kate Bush or a Tori Amos was to theirs, so strong is her artistry.

Alas, one crack of conciliation appeared in her veneer: Lorde donned a Toronto Maple Leafs Jersey for the finale of “A World Alone,” a gratuitous gesture to a doting flock.

Dear Lorde, it really wasn’t necessary: your cup runneth over.