When jazz guitarist Pat Metheny performs at Massey Hall November 18, Toronto’s Linda Manzer will be sharing the stage with him.

You won’t see her as much as hear her: through the ringing tones of Metheny’s classical fretless guitar as he performs the title track of his self-described “Chinese opera fretless blues” on his latest album, Imaginary Day; the sonorous rapture of the 42-string pikasso guitar as he wades through “Into The Dream;” or if he decides to treat his fans and dip into his impressive 23-album catalogue to revisit 1984’s The First Circle, the dulcet wonder of the sitar guitar prominently featured on “Yolanda, You Learn.” 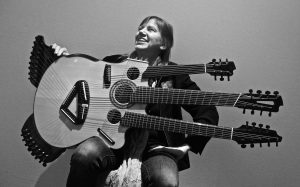 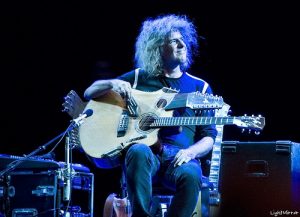 For it is the innovative handiwork of Manzer, one of Canada’s foremost luthiers, during the past 15 years that has helped spur Metheny into new spheres of creativity.

“Linda is really like a national treasure for you guys,” praised Metheny, who was in Toronto recently to promote his Group’s new album Imaginary Day.

The two first met backstage after a Pat Metheny Group appearance at Convocation Hall in 1982, and the guitarist concedes that he’s usually a target for both professional and aspiring guitar makers.

“You tend to be a magnet,” he admits, “Every other day that I play a concert, there’s a guitar maker that wants to show you their work.

“I’ve never been a guitar freak. For me, it’s a tool, the thing I use to get sound out so other people hear what I’m thinking. But Linda showed up with a guitar, I tried it, and hers really stuck out. I had never really played a guitar that responded like that. It really reminded me of a piano, it was so balanced. From the low end to the high end, there weren’t these big `whomps’ that I’m used to experiencing on almost any guitar.

“I ordered one. It wound up inspiring me to write and play a bunch of stuff that I probably wouldn’t have thought of before. It made me think of guitars a little bit differently. They became more important to me.”

Two weeks later at a downtown studio that is in the final throes of renovation, Manzer remembers the elation she felt after the fateful meeting, which ended at Metheny’s hotel as he auditioned her guitar for three hours.

“It was unbelievably exciting,” she recollects, “I probably woke up everybody in the hotel as I was going down the elevator, whooping at 3:00 a.m.”

The “collaboration ” — as Metheny calls it — has resulted in the addition of 14 axes to his stable of stringed instruments, all custom designed by Manzer.

“They all have distinctive sounds,” says the 45-year-old luthier. “For each one he asks for a specific type of sound, usually a phrase: ‘Can you make me a fretless guitar that sounds like Charlie Haden‘s bass or Jaco Pastorius‘ bass, like a cello?’

Metheny may be her most frequent client, but past beneficiaries of Manzer’s work include Gordon Lightfoot, Carlos Santana, Brazilian icon Milton Nascimento, Stan Samole, and one of the guitar maker’s personal idols, Bruce Cockburn.

“Bruce phoned me up one day and asked, ‘Can you make a charango?'” Manzer recalls of their first conversation. “And I said, ‘Is that an animal, vegetable or mineral?’ because I had no idea what it was. We had a meeting and he showed me his, which was made out of an armadillo shell. The problem he had with it is whenever he toured, the instrument was so fragile and sensitive that it would go out of tune as he walked onstage.

“So I made him a solid body, electric charango in blue.” 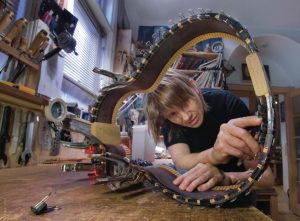 Toronto born-and-raised, Linda Manzer initially had career intentions as a folk singer. Raised in what she calls “a middle class, average household” in Etobicoke, she spent most of her nights hunched over a guitar in her bedroom, practicing and writing songs.

“I was a bad imitation of Joni Mitchell,” she laughs. “It was probably a blessing that I realized it early.”

An interest in painting led her to enroll at Sheridan College, but instead she found herself in a woodworking shop building a dulcimer from a kit.

“Then I started making other instruments, and teaching people how to do it even though I was officially enrolled as a painter.”

She cut short a stint at the Nova Scotia College of Art to apprentice with luthier Jean Larivée for two-and-a-half years in Toronto and another year-ande-a-half in Victoria, B.C. .

“As soon as I walked into Larrivée’s shop, I knew that’s what I wanted to do,” Manzer recalls. ” It was one of those instances where you’re lucky in life. All the bells go off and you know.”

When she returned to Toronto, was immediately offered a five-year exclusive arrangement with Ring Music because of his reputation. Within six months, the store had sold a Manzer guitar to Gordon Lightfoot.

Manzer completed her formal training in 1983 with a Canada Council grant to study with James D’Aquisto, the baron of American luthiers in Greenport, Long Island, thus rounding out her repertoire to include arch-top guitars As well as building flat-top guitars, Manzer’s craft extends to 15 stringed instruments.

She personally selects the wood that is ideal for instruments, preferring cedar, maple, mahogany, spruce, ebony and Indian rosewood from Canada, Germany, India and Africa.

And she’s worried that environmentally unfriendly practices are eroding her sources.

“Most forests are clear-cut, which means my wood supply could be gone in the next few years if clear-cutting continues. And it’s escalating because the forestry industry can do that much more efficiently.

Today, Manzer spends ten-hour days in her studios crafting 10 to 15 guitars a year, each which she estimates takes “100 to 300 hours” to complete. Prices start at $5000, and thanks to endorsements from performers such as Pat Metheny, she has a 20-month waiting list.

“I never expected this to be lucrative,” says Manzer. “Five years ago I was still worried as to whether I could make the rent each month. But aside from getting paid to do what I do, my biggest reward is hearing someone breathe life into a guitar I’ve made them.”

One of her “blue guitars” commissioned by millionaire collector Scott Chinery will be inducted into the Smithsonian this Fall, and she’s working on another Metheny guitar “that will combine acoustics and other electronic gadgets.”

Manzer says her livelihood is the perfect combination of art, science and music.

“It’s like a puzzle, building guitars. I think of myself as a snazzy carpenter.”