Another year, another Jethro Tull milestone.

As the enduring British rock band prepares to celebrate its 30th birthday in 1998, another anniversary has arrived: the 25th year since they recorded their groundbreaking epic album Thick As A Brick. 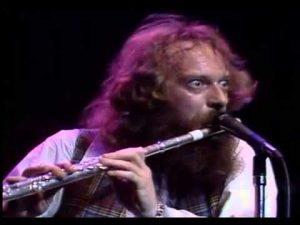 Created during an era when FM radio stations thought nothing of taking 20 minutes of airtime to broadcast entire sides of vinyl albums, Thick As A Brick was a 45-minute “concept” project that dominated the #1 position on the charts for most of 1972, cementing Tull’s reputation as international superstars, and a record that flute-tooting frontman Ian Anderson says was recorded as a lark.

“It was a sideways step from things we’d done previously, because we began as a slightly tongue-in-cheek blues band and went on from there to do more progressive rock albums,” Anderson, 50, explains from his home office 100 miles west of London.

“By the time we got to ’72 I think we were aware that it was a bit of a crossroads. Either we were going to get tied up in this rather heavyweight concept, which had been attributed to the album Aqualung — which to me was just a bunch of songs, it wasn’t that big a deal — or make a sharp left turn.

“So we thought, ‘Let’s deliver up the mother of all concept albums and do it in a lighthearted way — make it a bit of fun.'”

So Anderson invented an eight-year-old fictitious co-author named Gerald Bostock as a poetry contest winner disqualified for using the word “goer”, composed the continuous opus, created the album artwork to resemble a small-town newspaper, and completed the project in five weeks.

“I’d write a little bit of music in the morning, show up for afternoon rehearsal, and in the evening we’d attach it to the music I wrote the day before,” he recalls with a chuckle. “It was literally an organic growth from the opening bar through to the end of the piece. The album took two weeks to record, and the artwork took three.”

Thick As A Brick  was so triumphant that Anderson’s crew repeated the formula with 1973’s A Passion Play.

“Of course we thought, ‘Let’s do another conceptualized thing, and make it a bit more serious.’ That was not nearly as successful in the sense of having produced something which at that point appeared a bit more deadpan, bleak, and bombastic.

“You always have to get the nuance right, and Thick As A Brick  had that degree of charm about it that made it believable.”

To commemorate the album’s release, EMI recently released a digitally remastered limited 25th anniversary edition that recreates the full artwork and includes a live version plus an interview segment.

Despite the album’s multi-million sales — exact figures aren’t available, but the band has sold 60 million albums over the years — Anderson says he measures the success of a Tull piece by its ability to survive in the band’s growing 29-album repertoire.

“Thick As A Brick has been part of our concert set since 1972, ” says Anderson. “We obviously don’t play the whole album, but we do play 10 or 15 minutes of it. It’s one of my favorite bits.”

“It was a very bizarre experience for a lot of reasons,” laughs Anderson. “The good Captain, he wasn’t so bizarre. What was bizarre was the relationship between him and his fellow musicians who he ruled with a curious mixture of iron thumb and Nazi-like level of mind control. It was scary stuff, but good fun.”

Anderson says Van Vliet phoned him personally to invite himself on tour, but U.S. audiences didn’t warm to Beefheart’s avant garde combination of freeform jazz and rock and gave him “a rough ride.”

Anderson says he hasn’t spoken to Van Vliet in years, but has kept track of his whereabouts.

“He’s spending time in the Mojave Desert , painting,” says Anderson. “He’s a very sick man. I have a mind that I should somehow be in contact with Captain Beefheart before he leaves this mortal sphere.” 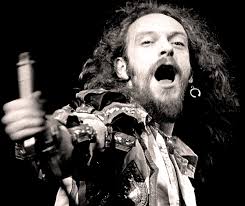 “I do actually play some Captain Beefheart in the incidental music before our concerts every night,” says Anderson. “While people are finding their seats, they hear Captain Beefheart and his Magic Band, Frank Zappa, The Stranglers, early Pink Floyd and a few other things. Before shows, I think I should be the DJ and make them hear what I think they ought to hear.”

With Tull’s 30th anniversary just around the corner, Anderson promises he and bandmate guitarist Martin Barre, bassist Jonathan Noyce, keyboardist Andrew Gittings and drummer Doane Perry will deliver a new band album. Anderson is also working on a new solo album, and is also trumping the idea of a duet album with himself, Barre, and arrangements of Jethro Tull material in unexpected musical settings.

But these days, Ian Anderson is just grateful he still has an audience.

“When you leave art school at 18 and become a successful musician, it’s such a lucky break,” he says. “To still have the job after 30 years is just brilliant.”