One question has followed Kate Bush during the 15 years since she released her first album and captured hearts everywhere with her elegant voice: Is she ever going to tour in North America?

Until now, the British singer’s response has always been “no.”

In a Toronto interview with Canadian journalists, the normally media shy Bush said she may change her ways to promote her new album, The Red Shoes.

“I’d like to do some dates at some point for this record,” said Bush, 35, during a rare promotional visit. “But as of right now, I have no plans.” Bush has never played outside Europe. She finished her last tour – which consisted of 30 full production shows which mixed mime, dance and music – in 1979.  Aside from the occasional charity benefit, Bush has shunned the stage in favour of the studio.

“My reluctance to tour wasn’t deliberate in a lot of ways,” she explained.”There was a presumption that I didn’t enjoy it, which wasn’t true. I did enjoy it. It was an exciting time for me. But it was completely exhausting, and at the end of it I felt quite exposed. At the time, I was concerned thatI was removing myself from writing songs and recording them, which is what I wanted to do at the time. I wanted to work more in the studio and learn about production.” 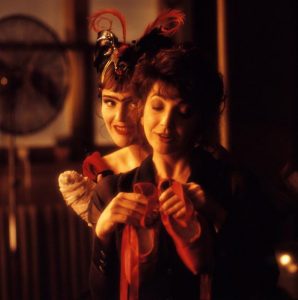 Bush says that by the time she got past a long phase where she lost all desire to perform, she grew nervous about returning to the stage. “Now I’ve come back to the idea of doing it – especially over the last couple of years. If we did do something, I’d like to do something personal. The idea of standing here and just singing my songs more simply now appeals to me.”

If she decides to tour, she won’t likely have to worry about filling seats.

The album, her seventh, is loosely based on the Hans Christian Andersen fairytale about a young girl who receives a pair of red shoes which allows her to fulfil her dream of becoming a great dancer. She can’t stop dancing, though and the shoes won’t allow themselves to be removed. Eventually, the girl orders her own feet to be amputated, and dies.

Mutilation aside, Bush says she identifies with the character.

“The imagery of possession by an artform – which in this case is dance – so it has a life of its own, is something I can relate to.”, she says. “I look at my albums as probably the same kind of thing. I am very obsessed by my work when I’m in the middle of it. I’m quite tenacious, and don’t like to let go of it until I’m sure I’ve finished it.”

The Red Shoes  also shows a lighter side to Bush in such songs as “Rubberband Girl” and “Eat The Music.” She admits it was a conscious move to contrast her last project, The Sensual World.

“With every album, I like starting from a fresh point,” she says, “It’s almost a rebellion. I need to do something totally opposite.”

“I wanted to put more emphasis on the songs this time out, and less emphasis on production. I tried to make the songs more direct, simple, and honest.”

Bush sees the recording experience as a chance to work with friends and people she admires. Some of the special guests on the album include violinist Nigel Kennedy, Procol Harum founder Gary Brooker, and guitarists Jeff Beck and Eric Clapton. But the tops for her was collaborating with Prince on “Why Should I Love You?”

Bush has alsoventured into film, directing a 50-min. short called The Lion, The Cross and The Curve, which co-stars Miranda Richardson and is based around six of the album’s songs. It should be out on video some time next year.

“I’m feeling very tired,” admits Bush.”I’m going on a holiday. I’m really looking forward to not pleasing anyone but myself.”

Be the first to comment on "Kate Bush: Will She or Won’t She?"