Guest list for Wrote A Song For Everyone includes Foo Fighters, My Morning Jacket, Kid Rock and Tom Morello 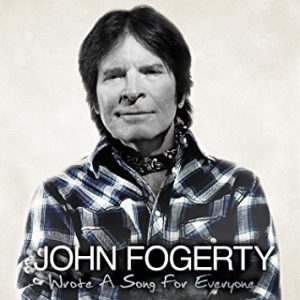 One of the most prolific — and important — rock ‘n’ roll writers of the 1960s, John Fogerty spat out hits like nails for the five years he fronted California swamp rockers Creedence Clearwater Revival before in-fighting and record label lawsuits derailed his momentum.

But he bounced back as a solo artist with 1985’s Centerfield — and although his track record since that album has been hit-and-miss in terms of sales — he still burns with teenage fire whenever he steps on stage, as anyone who has seen him perform recently in concert will gladly attest.

His songwriting chops haven’t diminished either, as Wrote A Song For Everyone brandishes two new gems: a six-minute country rock barnburner called “Mystic Highway,” and the other a cool bluesy little ditty about superficial values entitled “Train Of Fools.”

The remaining dozen pair Fogerty with some of his contemporaries, but this is no mere resuscitation of past glories: “Proud Mary” is transformed into a zydeco bash with Jennifer Hudson, Allen Toussaint and the Rebirth Brass Band channelling their inner N’Awlins; “Almost Saturday Night” recruits Keith Urban and laces up a mandolin for a country read on this otherwise blazing rocker; Bob Seger brings a laid-back vibe to “Who’ll Stop The Rain”; and in a rather inventive pairing, offers up a soulful title track aided by Nashville-based siren Miranda Lambert and Rage Against The Machine’s Tom Morello.
Foo Fighters, Dawes, My Morning Jacket and Kid Rock are among those who fill out the guest list for this warm celebration that Fogerty is gifting himself on his 68th birthday.

Fun for what it is.

DOWNLOAD: “Train Of Fools” is something a little different from the Fogerty canon: a thoughtful, philosophical number that reveals the song craftsman’s creative powers are still at their vital peak.

Be the first to comment on "John Fogerty gets some help on Wrote A Song For Everyone: album review"