The Devil Put Dinosaurs Here is only the fifth full-length album from Alice In Chains since 1990’s debut, Facelift 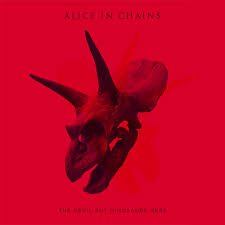 After 2009’s Black Gives Way To Blue confidently placed Seattle’s Alice In Chains in that rarefied company of bands surviving — and flourishing — following the death of their singer, The Devil Put Dinosaurs Here further cements William DuVall as a man whose voice echoes the departed Layne Staley, but also defines his own identity with a touch more sweetness.

Yes, using the word “sweetness” and “Alice In Chains” in the same breath may seem sacrilegious, but Staley was one of the few who could invigorate songwriter and guitarist Jerry Cantrell’s sobering diatribes with the proper chill and isolation without conveying any warmth, if that’s what the song called for.

DuVall may be a touch more temperate, but that doesn’t mean Cantrell has necessarily thawed in his pointed observations, as witnessed on The Devil Put Dinosaurs Here, only the band’s fifth full-length album since its 1990 debut, Facelift.

That said, I’ve always found Alice In Chains albums a mixed blessing, a cross between tedium and transcendence, and the dozen songs here that clock over an hour don’t do much to change that impression.
AIC’s signature murk-and-sludge psychedelia is best exemplified by the even murkier-and-sludgier “Hollow” and the cement-dragging bass riffs of “Stone” plucked by Mike Inez, but the title track and “Pretty Done” find the multi-layered vocals and endless repetition becoming a little worn with the passage of seconds.

But then the band turns around and performs “Low Ceiling,” a song that offers a rare concession to melody over riff, one of the few respites for those seasoned ears looking for a touch of progression.

And that’s the rub: The Devil Put Dinosaurs Here offers enough of the familiar and forward progress to succeed in spite of itself and some of the redundancy contained within its arrangements. Fans won’t be disappointed.

DOWNLOAD: “Breath On A Window” is the uptempo rocker that will breathe some life into your eyelids, a snappy rocker that’s a little lighter in nature than most of the album, with William DuVall’s singing more prominent in its attack than the multi-tracked approach of other tunes.
Alice in Chains plays the Molson Amphitheatre on August 20.

Be the first to comment on "Alice In Chains’ The Devil Put Dinosaurs Here won’t disappoint fans: album review"