Pioneering work with synthesizers and spectacle finally brings him to Toronto’s Sony Centre on May 9.

Despite the fact he’s sold millions of albums around the world with such instrumental epics as Oxygène and Zoolook, synthesizer and electronic music pioneer Jean-Michel Jarre has never played Canada.

After releasing 22 studio albums and six live ones, Jarre, 68, will finally plant his feet on Canadian soil at a one-man show at the Sony Centre for the Performing Arts on May 9.

“At last,” said Jarre over the phone a few weeks ago.

It’s been a long time coming. The Lyon-born Jarre broke into the North American mainstream with Oxygène back in 1977 — particularly the gently undulating track “Oxygène Pt. IV” — about six months after he released it in his native France.

The low-budget home-studio project, recorded in an era when few polyphonic synthesizers — those that could play chords instead of the monophonic synth restrictions of performing one note at a time — existed, was recorded in six weeks. 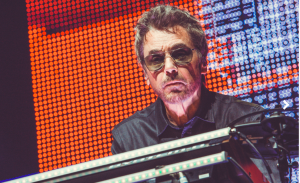 “The few that existed were far beyond my budget financially, so I did Oxygène with very minimalist equipment,” Jarre recalls. “The only polyphonic instrument I had was a string ensemble called The Eminent. Otherwise, I had monophonic instruments, and without MIDI (the technical standard developed in 1983 that lets electronic instruments and computers communicate), I was doing all sequences by hand. It was quite laborious.”

Upon its release, Oxygène shot to No. 1 in France and eventually sold over 12 million copies there alone. Since then, Jarre’s music has evolved with technology — his innovative 1984 album Zoolook contained samples of 25 languages including Eskaleut.

Along the way, he also forged a reputation for creating colossal open-air concert spectacles filled with projections, giant screens, lasers, lights and pyrotechnics that frequently drew staggering audiences of a million or more.

“I’ve always been interested by involving visuals in my music,” Jarre notes. “Electronic music was not like rock or jazz where instruments have been devised for the stage, and then we put microphones on them to put them in studios. Electronic music is the reverse: instruments were devised in laboratories and studios, and to put them on stage was not easy and not really too sexy, to stay two hours behind your laptop or behind your synthesizer or whatever . . .

“I had the ideas of trying to create these big spectacles and involving lots of visuals in days when almost nobody was doing on the rock scene. Now everybody’s doing it: When I see a music festival, I see something that I did 25 years ago.” 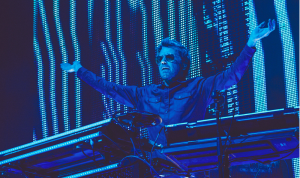 In 1981, Jarre was also the first Western musician invited to play China following the Cultural Revolution.

He cites some of these international shows as part of the reason visits to Canada was delayed.

“I’ve been involved in my life in lots of big settings and doing lots of one-off outdoor concerts and they’ve almost been like pre-producing movies,” Jarre explains. “And for some reason when I was touring, the dates didn’t work out and sometimes the project was too cumbersome to stage outside Europe.

“But I’m so happy to share this new project with Canadian audiences because I’ve been really inspired by Canada: Cirque du Soleil, IMAX, Omnimax, all the developments of digital technology. I’m excited to start my North American tour in Toronto.”

Jarre will be bringing plenty of new music to the Sony Centre. Since 2015, he’s released a slew of albums that include Oxygène 3 and a pair of star-studded works christened Electronica 1: The Time Machine and Electronica 2: The Heart of Noise that include such collaborators as Moby, Armin Van Buuren, Depeche Mode and Erasure founder Vince Clarke, Massive Attack, filmmaker John Carpenter, Edward Snowden, Cyndi Lauper, Pete Townshend and others. Toronto expat Merrill Nisker, a.k.a. Peaches, guests on the Heart of Noise track “What You Want.”

“For me, all the collaborators on Electronica are musicians who have been, and are, a source of inspiration — and who are linked one way or another with electronic music,” Jarre explains. “Peaches is an extraordinary artist. She’s also an activist and this electronica is linked to activism. Obviously, she being an activist for women and homosexuals and in doing so many great things in her lifetime, but Peaches also does this in a very fun and provocative way. I must say it has been one of my most exciting moments in the studio.”

Jarre, who has counted actresses Charlotte Rampling and Anne Parillaud among his spouses, is the son of Maurice Jarre, a three-time Oscar-winning composer of such movie scores as Lawrence of Arabia and Doctor Zhivago. His parents split when Jean-Michel was five and his dad relocated to the U.S.

Jean-Michel Jarre started out playing in rock bands and eventually studied avant-garde classical music under Pierre Schaeffer and Karlheinz Stockhausen, known for his electronic experimental music, aleatory, spatial and serial compositions. Jarre says those studies are when he truly got hooked on electronic music. 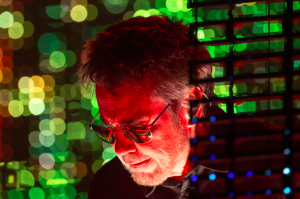 “I was convinced that it would become the music of the 21st century, for a very simple reason: because electronic music is not a genre of music, it’s a way of approaching composition and production with noise and sounds,” he explains. “The idea of going out there with a microphone and recording the sound of the wind, of the rain, of the street and making music with it was something actually new and revolutionary for my generation.”

He likens his work to being in a kitchen, “cooking sequences, waveforms, loops, beats in a very organic, very sensual way, like putting spices and ingredients in your music.”

Be the first to comment on "Jean-Michel Jarre finally plays Canada, after 40 years of electronic music"