Alanis Morissette reflects on a tarnished brass ring: “I saw that fame could support me as a tool to support my agenda, my agenda of uplifting, and comforting, and titillating — just engaging in conversations that I’m so passionate about. . . . I need fame to support me to be in the public eye in that way. So it’s a means to an end rather than an end in itself.”

Hands up, all those who remember Alanis Morissette’s earliest days as a Canadian dance-pop diva.

Didn’t think so, for few artists in contemporary pop and rock music have reinvented themselves so successfully — Underworld and Justin Timberlake come to mind — that they’ve obliterated their previous creative identities. 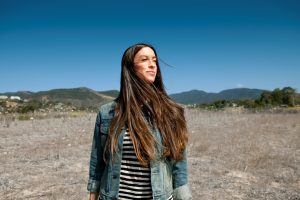 But as history reminds us, the Ottawa-born Morissette evolved from, when I first interviewed her in 1991, a manufactured teenage Tiffany comfortably planted in sugary candy floss confines of fluffy pop radio for her platinum “Too Hot,” to the earnestly emotive embodiment of jilted women everywhere with 1995’s explosive Jagged Little Pill, a game-changing album that gave rise to the voice of the angry young female and transformed its author into a global phenomenon.

Spurred by “You Oughta Know,” Jagged Little Pill sold more than one million copies in Canada, 16 million in the States and 33 million around the world — earning her four of her seven Grammy Awards, and seven of her 16 Juno Awards — and making Morissette such a magnetic maelstrom of mainstream attention (think epic Bieber proportions here) that life became unbearable.

“I didn’t know that that would wane,” admits the woman, sitting before me in a downtown Toronto hotel, in town to promote her upcoming album, Havoc and Bright Lights, out Aug. 28.

“Had someone told me during that time that this was temporary, that there would be some semblance of sanity that will come back into your life, I think I would . . . There was a period of time in the mid-to-late ’90s where I just didn’t want to be here anymore. I thought, if this is the new way of life and this isn’t going anywhere anytime soon, I’m not into this.

“So it was the late ’90s when I was able to walk into a grocery store and not be accosted. It was pretty intense for a while.”

As the trend-setting Jagged Little Pill moves further into the recesses of time, her newer albums sell less (2008’s Flavors of Entanglement has sold 235,000 copies in the U.S.) while the public obsession with stardom continues to grow to epidemic magnitudes. Morissette, 38, uses “Celebrity,” a song on the new album, to offer a unique perspective.

“I have tasted stardom still before I breathed,” she sings on the track, which, like most of the dozen songs on Havoc and Bright Lights, is rock-driven.“Give me celebrity/ My kingdom to be famous/ Tell me who I have to be/ Starting to be famous.”

Morissette was that animal, at one time, she admits.

“Well, I think I was sold the same bill of goods that everyone’s sold, which is that fame will afford high self-esteem, great friends, constant bliss — and I quickly found that to be hollow,” she notes, looking happy, fit and svelte, brunette strands of hair framing her long face as she occasionally flashes a beaming smile. 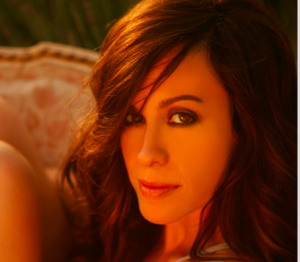 “I grabbed the brass ring and saw that it was disillusioning, to say the least.
“So I think in the late ’90s I saw that fame could support me as a tool to support my agenda, my agenda of uplifting, and comforting, and titillating — just engaging in conversations that I’m so passionate about.
“And for me to do that on the grand scale that I was born to do it on, I need fame to support me to be in the public eye in that way. So it’s a means to an end rather than an end in itself.”

These days, even with ever-predatory paparazzi buzzing up and down the street at her current California address, the prospect of cameras invading her privacy doesn’t seem to ruffle her.

“You can’t really guard from it, in my experience,” she admits. “The key for me is maybe to take a shower, and get out of your sweatpants. You get the most regrettable photos if you don’t clean up before you go out. So that’s an extra consideration that takes extra energy.

“But my whole activism is around intimacy and commitment and the healing that comes from monogamy and intimacy and long-standing relationships, so the one with my son is exactly that and the one with my husband is exactly that.
“So us being photographed, for me, is a modelling of what I’ve always aspired to, so on a level I can frame that as activism.”

Which brings us to the latest earth-shaking evolution in Alanis Morissette’s life: family.

In May 2010, Morissette married rapper Mario Treadway and gave birth to their son, Ever Imre, in December.

Considering that at least Jagged and Flavors were written in the wake of high-profile breakups (goodbye Ryan Reynolds!), how has motherhood and romantic stability creatively impacted Morissette?

“Writing a bona fide love song for real, for the first time without some tinge of despair underneath, in a song called ‘Til You,’ where I write about the fulfilment of having a monogamous commitment at last,” replies Morissette, who is expected to hit Toronto for an October show.

But the anger still remains in “Woman Down,” a tune Morissette describes as “the whole idea of the patriarchy and the misogyny and the chauvinism that I was surrounded by in the rock ’n’ roll world and in my personal life, and that going away, of all things.”
“For a long time as an alpha woman, back in the day we had our heads chopped off and we were burned at the stake, and now, in a beautiful way, we’re actually being championed and celebrated as afforded.
“And I had never known that. I had only known men who wanted to kill me for being outspoken or being supportive or for being in the driver’s seat. I never meant to evoke or horrify men by my very existence, because that’s what I was born to be, so now I feel there’s a whole new climate.”

“I play the beta quite well,” she replies, laughing. “I’m deferring and I’m respectful and I’m Canadian, for Christ’s sake.”

Be the first to comment on "Havoc over, Alanis Morissette sees the bright lights"