No matter how badly they desire, some bands can’t seem to shake the parameters of their own sonic fingerprint.

At least that’s how Fujiya & Miyagi’s David Best perceives it. He says his band has been trying for ages to drastically reinvent its sound. He thought the conundrum was solved when the Brighton-based electronic funk alchemists, who usually self-produce their music, brought in producer Thom Monahan to handle their latest album, 2011’s Ventriloquizzing.

“We wanted to make Ventriloquizzing different, and I think we’re one of those bands how no matter how hard we try we always sound like ourselves,” Best lamented over the phone recently from the U.K., ahead of a Tuesday show at the Wrongbar. 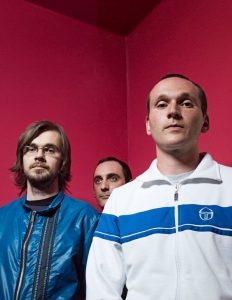 Fujiya & Miyagi sound is an appealing concoction of sandwich-layered synthesizer; funky, semi-robotic rhythms and Best’s near-whispered singing of minimalist idioms that are an obvious homage to one of his favourite influences, ’70s Dusseldorf automatons Kraftwerk.

“For me, it stems from being 15 or 16 when I first heard (German electronic act) Can. Everyone knew Kraftwerk because they got on the charts when we were kids and they’re an odd-looking band that kind of make you feel scared when you were 12.

When Best met guitarist Stephen Lewis in 1999 at a local soccer game, they found that they shared similar tastes.

It was an inauspicious beginning.

“We must be really, really stubborn because, for the first year, I think we came up with one song,” laughs Best. “And to start with, I had no intention of singing. I was just the guitar player for only about a year when Steve said, ‘Why don’t you whisper something?’

“So probably, that’s when it became, to us, our sound.”

It would be another four years before the duo would record its first album, Electro Karaoke in the Negative Style, and by the time Best and Lewis finished 2006’s Transparent Things, they decide to expand the lineup to include bass player and keyboardist Matthew Hainsby.

“He was hired purely on the fact that he liked Wire and Brian Eno,” says Best.

Toward the end of 2008’s Lightbulbs sessions, Fujiya & Miyagi expanded again, adding drummer Lee Adams, who will make his first Toronto appearance at the Wrongbar gig.

“The last time we were in Canada, all the shows were with a drum machine,” Best recalls.

Although it’s been well over six months since Ventriloquizzing was released, Best says the reason their visit to Toronto is so late in the touring game is due to family commitments as new parents: the birth of Lewis’s daughter trumped the debut of Best’s son Riley by a mere 11 days, so the duo is sticking close to home.

“This North American tour is only 2-1/2 weeks long, which is about the amount of time I’m willing to be away from home at the moment,” Best declares.

But time spent in their Brighton home base will allow Fujiya & Miyagi to record Ventriloquizzing’s follow-up: Best says they’ll be reverting to their self-production ways for album No. 5.

“We know what we want to do next,” Best assures. “We’re going to go more electronic, I think.

“I’d like to take away the traditional aspect of the songs, the chord structures and stuff, and be more rhythmical, but we’ll see: the proof is in the pudding.”

“I’m sure it’ll probably sound like all the others, but I’m hoping it’s going to be a lot more exciting and very, very electronic.”