By: Nick Krewen Special to the Star Published on Fri Jan 27 2012

“The first time I saw the piano player, he had a pinata on his head, so I knew he was open-minded.”

That may be all the explanation you need to see Foxy Shazam, the shock rock sextet that hails from Cincinnati, Ohio, when it opens for The Darkness at the Phoenix Wednesday, because its gravity-defying performance was the undeniable highlight of last summer’s Warped tour. 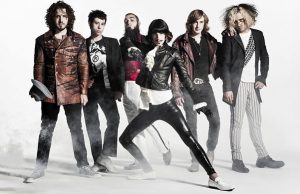 But when singer — and ringleader — Eric Nally described the appealing qualification of keyboardist Sky White that convinced him to recruit White for his merry band of musical misfits, he left out the crucial detail that the bearded White, with a mad gleam in his eyes, often tackles his keyboard as if it were employed by the WWE, wrestling and stomping it to submission as he’s playing it without skipping a beat.

And then there’s Nally himself, who will veer from a standstill position where he’s just simultaneously swallowed four lit cigarettes into a blink-and-you’ll-miss-it perfectly executed roll that plants him on the other side of the stage, usually in the span of a two-bar break between vocal duties.

There are other unusual aspects surrounding Foxy Shazam — not the least of which is adding Alex Nauth’s trumpet fluently into a sound best described as the bombastic stepchild of ’70s glam as whelped by the parental commune of Quentin Tarentino, Pam Grier, Freddie Mercury and the troupe from Laugh-In — but it’s best to witness the combo in person and draw your own conclusions.

As Nally points out, there’s a charming inscrutability about the band that is blatantly absent from today’s Internet-Facebook-Twitter-obsessed society.

“I think it’s very important to maintain some type of mystique to who you are as an artist,” Nally said last week from the home he shares with his wife and two sons. “I don’t want to know everything about who I listen to: I want to pretend that I know who they are and build my own story about them . . . So I don’t want to be on the Twitter all the time, letting everyone know when I’m having a sandwich or when I’m going to take a shower.”

Besides, it’s all about the showmanship with Foxy Shazam, formed in 2004, although Nally reveals he has other aspirations for The Church Of Rock And Roll, the band’s fourth album, released last week on the rejuvenated I.R.S. label.

“I want to revive the spirit of rock,” he explains about the album, co-written and produced by The Darkness’ Justin Hawkins.

“I’m not really talking about the style or the genre of music. For me, it’s a spirit, this emotion that music used to have that I rarely, rarely hear today on the Internet, the TV, the radio, wherever.

“And I don’t know that Foxy has it either. Maybe the word is soul — the kind of spirit that should be in music, always, and it’s not anymore.”

Whether the listener will feel that inner warmth while listening to “I Like It,” — basically a salute to the backside of certain African-American women — or to the unbridled lustful anthem “Holy Touch” remains to be seen, but fans won’t be disappointed by Foxy Shazam’s deadpan panache. 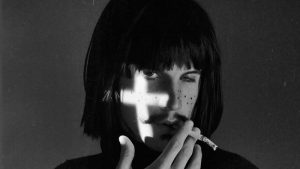 There’s even a somewhat candid number on The Church Of Rock And Roll: “Forever Together” finds Nally addressing the push-pull conflict between his family life and touring, something he often addresses with the audience in his between-song banter.

“Sometimes I might be drinking too much or staying up too late, and having a family has always kept me just level, down to earth and helped to inspire me through my music, too, in a lot of ways.

“I always give the reference — have you ever seen Indiana Jones & The Temple Of Doom? Do you know the part at the end where Jones is kind of suspended between two mine cars and they start to slowly separate? And he’s trying to hold on as hard as he can?

“Sometimes that’s the way I feel being a musician.”

But Foxy Shazam fans needn’t worry — Nally has it all under control.

“I don’t think there will ever be a point where I’ll have to choose between family and the band,” he states. “It’s a hard balance, but I’ve done it my whole life.”

Be the first to comment on "Foxy Shazam seeks soul, spectacle"