Who needs Deadheads when you have Fredheads?

With 16 albums and two DVDs to his credit, Canadian alternative country singer/songwriter Fred Eaglesmith has built a particularly devoted following in North America, Australia and the Netherlands. 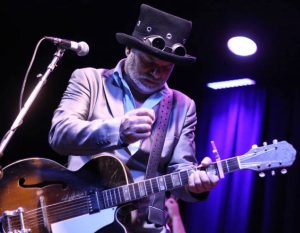 And while his notoriety and album sales may not rival that of a Bruce Springsteen or a Bob Dylan, Eaglesmith has also managed to create something of an independent underground festival scene, of which he is the central figure.

There are nearly half a dozen Eaglesmith-branded events located in various U.S. and Canada communities on tap for 2009, including the 10th Annual Roots On The River Festival in Bellows Falls, Vt., which took place June 11–14 and featured artist such as slide guitar maestro Sonny Landreth, folk/country artist Hayes Carll, country/rock artist Junior Brown, and female folkies Red Molly, among others, plus three performances by Eaglesmith and his Flying Squirrels band.

The reason for his appeal is twofold, says former manager Charlie Hunter.

“Fred is a true songwriter, on the par of a John Prine or a Bruce Springsteen or a Woody Guthrie,” says Hunter, who cofounded the Roots On the River Festival in 2000 and ran it until 2007.

“But he is more approachable than artists who came up through the major label system. Fred’s background is as a small businessman and farmer, so he inherently understands the idea of constructing a small festival.”

Hunter says Fredheads display the same allegiance to their muse as Prine and Springsteen fans. “Fred inspires that kind of devotion and excitement among people who have been turned onto him. He’s just more accessible than they are.”

Tracie Ferguson, who has promoted the Fred Texas Weekend events for five years running, says Eaglesmith’s close bond with his fans is key to the success of these gatherings.

“He gets along so well with his fans, and he likes being around them, so the camaraderie is there,” Ferguson explains. “And as much as he’s a songwriter, he’s a comedian as well. All the shows are a lot of fun and they’re all different.

“It just works — it’s a particular group of people that all kind of think alike, and there’s a whole bunch of them.”

The actual attendance for these gatherings is modest — anywhere from 500 to 2,000 people — although that figure can double over an entire three- or four-day weekend.

But that’s the way Eaglesmith himself says he prefers it: informal.

“I started them as anti-festivals,” Eaglesmith reveals. “I wanted a festival that didn’t have a lot of rules, that was just fun and had just a couple people running them. They just grew from that.

“Some festivals draw 1,000. Some have less than that. It just depends where it is and what it is.”

Eaglesmith says one of the most important aspects of his Fredfests is accessibility.

“I didn’t like those festivals where there was all this snow fence around, where there were musicians’ areas and places the crowd couldn’t go — all this security, and no dancing.

“So a lot of this started from [wanting] festivals that weren’t like that. I just wanted to make it like a family picnic, where you would just take your family and say, ‘I had a really good time there.’ It’s really low key.”

With more than 100 songs culled from nearly 30 years worth of material and such acclaimed albums as Milly’s Cafe, Lipstick, Lies & Gasoline and 2008’s Tinderbox, Eaglesmith has the catalog depth to divvy up his sets between solo and group performances, and acoustic and electric shows.

And at least one of the festivals — his annual Aylmer charity picnic — is tied to an ecological cause with all proceeds of the show going to two conservation areas: the Long Point Basin Land Trust and the Catfish Creek Conservation Authority.

“It’s a really beautiful park with old growth forestry,” says Eaglesmith. “We raised $5,000 a year between the two of them, although the festival is more of a thing where musicians get to hang out with each other. I started that one years ago because I didn’t see my friends.”

Ferguson notes that other singer/songwriters have organized similar events in the wake of these various Fredstocks.

“After we started it, a bunch of people started picking up on having their own festival,” notes Ferguson. “Hayes Carll was one of them. Randy Rogers was another. It’s kind of a fad right now — having your own festival.

“Fred was probably the pioneer in that.”

Be the first to comment on "Fredstocks: The Anti Festival"