The venerable British pop star brought out the old favourites at the Air Canada Centre in Toronto on Feb. 6, 2014.

Elton John unspooled another one of his almost three-hour, 28-song marathons at the Air Canada Centre on Thursday night and it was the equivalent of musical comfort food. Hit after nostalgic hit paraded itself before the sell-out crowd of 20,000; there was a passing nod to the present and a few obscurities thrown in for good measure.

And although he recently released the critically acclaimed The Diving Board — his first album of new studio material in six years — this tour is in support of an old flame: Goodbye Yellow Brick Road, his watershed 1973-double album set for the deluxe reissue treatment on the pianist’s 67th birthday, March 25.

At the time the eventual 31-million seller was released, John was just emerging into the prime of his popularity, his wildly physical and flamboyant performances barely exceeding the exaggerated stage fashions that found him wearing outlandish glasses, wild costumes and towering platform shoes a full decade and a half before Lady Gaga was a gleam in her father’s eye.

Musically, John had the goods to back it up: a gifted child piano prodigy with a knack for composing timeless melodies, complemented by the imagery-riddled prose of lyricist Bernie Taupin, he simply owned radio in the mid-’70s with an impressive deluge of songs that featured his particular ivory-tinkling, vocally veered into amazing falsetto and fed the public’s appetite without falling into redundancy. 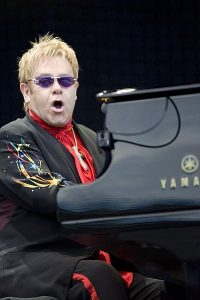 Thursday night, it was the 1970s upon which John focused most of his energy. The first four songs out of the gate were the Goodbye Yellow Brick Road classics “Funeral For A Friend/Love Lies Bleeding,” “Bennie and the Jets,” “Candle in the Wind” (the Norma Jean version, not the Princess Diana tribute) and “Grey Seal.” The crowd was receptive early, hardcore fans charmed by the sight of two very familiar faces in his five-piece band: drummer Nigel Olsson (45 years) and guitarist Davey Johnstone (41 years), with him both on the original recording sessions and on the road.

He reached back further into the decade for the next pair of Madman Across the Water numbers, “Levon” and “Tiny Dancer,” turning the former into a bit of a gospel workout with a hint of barrelhouse piano and performing the latter as sensitively as an ice hockey arena would allow. Then he swerved into the first rarity, a faithful rendition of “Holiday Inn,” also from Madman, followed by Honky Chateau’s “Mona Lisa and Mad Hatters.”

In the ensuing 44 years since he’s recorded some of these tunes, John’s falsetto may have been ravaged by his mid-’80s throat surgery, and age may have deepened his voice and hampered his physicality, but his energy remains indefatigable.

Sitting at a grand piano — the half-moon video-screened stage open to afford an obstacle-free, 360-degree view with lighting largely provided by a gigantic, retractable chandelier — John, dressed in a glittering lime tunic ensemble rooted by ruby shoes, sang his heart out. Supplemented by his band (veterans Kim Bullard, Matt Bissonnette and John Mahon on keys, bass and percussion, respectively) he mainly letting the music do the talking as his fingers did the walking.

He remained true to some of his bigger hits — “Someone Saved My Life Tonight,” “I Guess That’s Why They Call It the Blues” and “Your Song”; surprised with a dulcet piano passage that sounded like falling stars before segueing into a poignant “Rocket Man,” and gave us a touching rendition of “Sorry Seems to Be the Hardest Word.” After an epic “Don’t Let The Sun Go Down On Me,” he ramped up the rock quotient with the adrenalin-rush combo of “I’m Still Standing,” “The Bitch Is Back,” and the one-two Yellow Brick Road punch of “Your Sister Can’t Twist (But She Can Rock ’n Roll)” and “Saturday Night’s Alright (For Fighting).”

So yeah, Elton John still has it, his band is tight and the fire in his heart to create new music remains lit, as revealed by the evening’s most telling comment late in the show: “I wanted to play a new song, but it would be a waste of time because you really don’t want to hear them.”

An astute, and perhaps mildly tragic observation, but Elton, that’s what happens when you provide several decades worth of an unforgettable soundtrack to peoples’ lives: sentiment will trump unfamiliarity almost every time.

Be the first to comment on "Elton John still rocks, but with a little less falsetto"