Spontaneity and fun keep the road vital for axeman at Hugh’s Room Sunday. 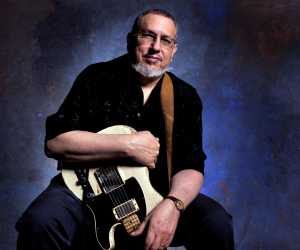 David Bromberg, the journeyman multi-instrumentalist string wizard who returns to Hugh’s Room on Sunday, is certainly one of a kind.

At 66, he’s done it all: as a session and sideman, he’s played and recorded with everyone from Tom Rush, Jerry Jeff Walker and George Harrison to Willie Nelson, The Grateful Dead and Bob Dylan.

As a band leader and songwriter known for his musical sense of humour and the fact that he’s seamlessly adept at blues, folk, country, jazz, bluegrass and rock, Bromberg has recorded and released 17 albums, including this year’s star-studded Use Me, and 2007’s Grammy-nominated Try Me One More Time.

And whether he’s dazzling his audience with his unique ability to play lead and rhythm simultaneously on guitar (a skill he personally learned from South Carolina blues and gospel singer Reverend Gary Davis), or sharing his prowess on mandolin, fiddle, Dobro or pedal steel, there is one thing that Bromberg absolutely guarantees in concert while drawing from a repertoire he estimates stands between 75 and 150 songs: spontaneity.

“I’m a very lucky human — I’ve always been able to do what I wanted,” said Bromberg Thursday while driving with his accompanying trio to an Ohio gig. “My shows are kind of like that. I don’t make up set lists. I just go on stage and when I finish a tune (it) gives me an idea of the energy I want to use for the following tune.

“It drives my band crazy.”

Although this his second Toronto appearance since a July date at Hugh’s Room, Bromberg hadn’t appeared locally before that for “decades,” due to a self-imposed exile.

“I got burnt out,” Bromberg admits. “I was on the road at one point for two years without being home for two weeks. And being too stupid to recognize burnout — I never thought I could burn out — the only conclusion that I could reach was that I was no longer a musician.

“Because when I wasn’t travelling, I wasn’t practicing, I wasn’t writing. I wasn’t jamming. So I wasn’t playing. I felt that whatever made me a musician was gone. I didn’t want to be one of these guys who drags himself on stage and becomes a bitter imitation. So I decided to find another way to live my life, and for 22 years I barely touched a guitar.”

Instead, the Philadelphia-born, Tarrytown, N.Y.-raised Bromberg “dove into” starting “a violin-making school,” sales and repair shop in Wilmington, Delaware that he operates with his wife, Nancy Josephson.

For Use Me, Bromberg reached out to John Hiatt, Vince Gill, Widespread Panic, Levon Helm, Linda Ronstadt and others; asking them not only to write a song for the project, but also produce their contribution.

“It more than lived up to my expectations,” says Bromberg. “I’m fiercely proud of this CD. I think it’s the best thing I’ve done, or had a part in.

Be the first to comment on "David Bromberg: Gifted guitarist keeps ’em guessing"