Starving for new challenges outside their proven abilities, recording artists are increasingly entering the kitchen to chase their next meal ticket: food and drink product lines.

You can start the day off with some links of George Jones‘ Country Sausage and a cup of Ted Nugent‘s Nuge Java, which should ease your growling stomach until lunchtime, when the microwave heats up a hearty bowl of Smokey Robinson‘s delicious seafood gumbo spiced, perhaps, with Bob Weir‘s Otherworld Hot Sauce and chilled with that refreshing bottle of Moby‘s Teany Iced Tea with Lemon.

For supper you can go the heart-smart route, rewarding your discriminating palate with Linda McCartney‘s Portobello Mushroom Barley Pilau, followed by a Chaka Khan Chakalate Truffle for dessert and washed down with a vintage chardonnay or cabernet from Vince’s Vineyards, the Sonoma County, Ca. business co-owned by Mötley Crüe’s Vince Neil.

If you’re looking to satisfy the carnivore within, then a serving of Dwight Yoakam‘s comforting Chicken Fries, lovingly smothered in Kinky Friedman‘s Private Stock Salsa and chased with a glass of Sammy Hagar‘s Cabo Wabo Tequila might do the trick.

Whether their products are in your local supermarket or marketed as a website specialty item, these musical multi-taskers are hoping to parlay their celebrity stature into profitable venture.

And if you’re a celebrity trying to break their product into a mainstream supermarket chain, the advantage of having a famous name associated with your brand is considerable, says John Marburger, president and CEO of Peru, Indiana-based Modern Foods, home to The Dwight Yoakam Bakersfield Biscuits brand that includes Boom Boom Shrimp, Chicken Lickin’s and other frozen food items,

“The main reason is product differentiation,” notes Marburger, who says Yoakam products are currently available in over 5000 grocery stores.

“For us, the consumer has a lot of choices nowadays. This gives us a way to break through the noise and differentiate ourselves from others.”

Tapping into the artist’s loyal fan base also provides immediate credibility and an instant market, claims Jeff Brain, CFO of the Glendale, CA-based Smokey Robinson Foods that offers gumbo in Seafood and Rice And Bean flavors.

“They’re very loyal to him,” says Brain. “We knew they would try the food once out of curiosity. What keeps people coming back for it is that the food is actually very good. In Smokey’s Motown tradition of quality, we wanted to make sure the food was also being held to that high standard.”

Another unique aspect is the degree of involvement of artists in their product. Modern Foods’ Marburger says he consults “Bakersbilly” country rocker Yoakam on a weekly basis.

“It’s not really an endorsement, he’s deeply involved in the process,” says Marburger, a veteran food manufacturer who operated his own company for a dozen years prior to forming Modern Foods.

“He names all the products and is involved in developing products. We’ll come up with an idea that is generally based on research on food trends and try to be health-conscious and innovative.

“If you look at our chicken fry product, there was really no such thing before we started doing that: It looks like a French fry but it’s made out of white meat chicken. It’s really innovative and different and Dwight was involved in its development.”

Did their triumphs motivate other recording artists to build their own recipes for success?

“Food was just the final decision of something I’ve been intending to do for awhile,” contends Smokey Robinson, the Motown legend who introduced his first “Soul In A Bowl” brand of gumbo products early last year.

“You know Leon Isaac Kennedy? He and I have been best buddies for better than 30 years – he’s been in the movie producing and acting end of show business and I’ve always been in music. We always talked about doing something that had nothing to do with entertainment.”

Robinson, who credits Kennedy for approaching him with the idea of creating a gumbo line based on their respective family recipes, chose to launch a frozen food line because he says it’s better for consumers.

“When making frozen foods, you don’t have to put in as many preservatives or as much sodium as you would normally if it was just a normal shelf item,” he explains. “We wanted to make it as healthy as possible.”

“We’re going to use part of the proceeds from this to have forums, seminars and educational classes for young, inner city and minority kids to teach them that they don’t have to be sports figures or entertainers in order to make a good living for themselves,” notes Robinson, who will be introducing a Chicken and Sausage gumbo in the fall as well as three additional new products by March 2006.

“There are many great minority businessmen – and when I say minority, I don’t mean just black — and the kids don’t see these people because they’re behind-the-scenes people.  We want to let them know that they’ve got just as good a chance at being an entrepreneur or something else as they have being a sports figure or an entertainer. That’s very attractive to me.”

Meanwhile, the Smokey Robinson gumbo rollout continues, with placements in the Safeway, Albertson, Kroger and Ahold supermarket chains, and the artist making personal in-store appearances to promote his product.

But you don’t have to align your product with a major supermarket chain to have fun.

For 15-and-a-half years, Bill Wharton, the Florida bluesman better known as The Sauce Boss, has been literally cooking up more than onstage music for his audiences.

At the end of each performance, Wharton serves his patrons a bowl of gumbo laced with his personal line of Liquid Summer Hot sauces. 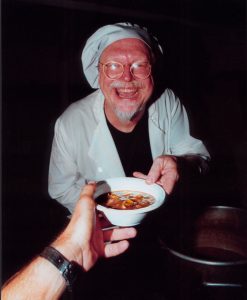 “The thing that’s really unique about the original Datil pepper sauce I make – I have three now – is the flavor and that it’s got this creeper burn: It takes between five and 15 seconds to become really hot, ” explains Wharton, who sells bottles of Liquid Summer at his shows and on his website, www.sauceboss.com.

“It was New Year’s Eve 1989 when I decided to make a big pot of gumbo and illustrate to everybody in the audience how good this sauce is when you cook with it. 125,000 bowls later, here we are.”

Wharton — the only performer who demands a gumbo rider for “okra, onions and peppers” — says his healthy mail order business moves “8,000 to 10,000 bottles a year” but remains a sideline to his music.

“It’s a little hook,” Wharton admits. “Some people call it a gimmick but I think of it more along the lines as an extension of my own personality. It’s me.  I’ve always enjoyed cooking and I’ve always been a musician. It’s not a Madison Avenue scheme.

“But it’s kind of a shoo-in. People get curious and when they hear the music, that’s my secret weapon.”

Be the first to comment on "Cooking Up New Themes"