The 100th performance of the band’s “A Head Full of Dreams” world tour featured confetti-cannons, LED displays and the CN Tower.

It’s not every day that the CN Tower gets transformed into the world’s tallest concert lighting prop. 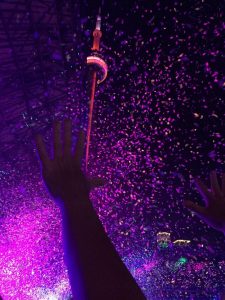 But it’s also not every day that British rockers Coldplay take time to perform at the open-roofed Rogers Centre on a perfect summer evening. The fact that it was the 100th show of their current A Head Full of Dreams world tour — and first of two Toronto appearances in five years or so — gave them an excuse to do something special and share the occasion with a crowd estimated between 40,000 and 50,000 people.

And “share” is the operative word: concertgoers were handed specially designed LED-enhanced wristbands at the entrance that were remotely programmed to change colour on cue, thus turning the audience itself into part of a dazzling kaleidoscopic light show. So when the lights finally dimmed and the “CNN Tower” — as singer Chris Martin mistakenly referred to it later in the show — lit up in rainbow hues to the strains of a pretaped Maria Callas opera number announcing the band’s stage arrival and the crowd was awash in a sea of red wristband illumination, the party began.

And “party” was the other operative word: before the opening number, “A Head Full of Dreams,” was over, singer, guitarist and pianist Chris Martin, guitarist and percussionist Jonny Buckland, bass player Guy Berryman and drummer Will Campion had launched the fireworks and unleashed the confetti cannons on a hyped-up stadium gathering.

While the glowing wristbands were so Taylor Swift and the surging fireballs were so Metallica, the confetti-spewing mortars were strictly Coldplay, and they employed them frequently throughout the show as Martin, often on the B-stage close to the middle of the crowd, spun around with his arms wide open, drinking in the exhilaration of the moment.

Think of it as a big birthday bash with a small city of like-minded friends who hired Coldplay as the backyard entertainment for two hours — yes, there were balloons, too — and you get the idea of the effect that they were successful in achieving.

In fact, at times the spectacle almost overwhelmed the music, culled from seven albums (and 80 million sold) since Coldplay first arrived on the scene with Parachutes in 2000. The U.K. rockers’ popularity has since skyrocketed, with their current trek already standing as one of the top five tours of all-time: $413.6 million (U.S.) and 4.4 million people through its first 88 shows and counting, according to Pollstar.

Martin was in top form in his role as personality, emcee, cajoler and frontman, his impressive vocal range easily embracing the occasional falsetto, and throwing in the odd improvised vocal (mentions of Toronto were incorporated into Mylo Xyloto’s “Every Teardrop Is a Waterfall” and, later, he wove a Drake mention into a short acoustic song about the city). Even when the well-paced show flitted from romantic tenderness (“Fix You”) to rousing optimism (“Viva La Vida”), Martin and his band nicely lived up to each occasion. 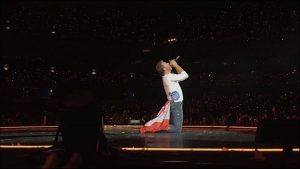 At the same time, he didn’t take himself too seriously, restarting “Fix You” after accidentally swallowing a piece of confetti while singing on his back on the stage ramp. “Please don’t upload this moment to YouTube,” Martin semi-jokingly pleaded with the crowd. “Even if you hate the band, please give us a break on this one.”

While Coldplay definitely earned that break, it was more difficult for the band’s two opening acts. While Izzy Bizu, wearing a Blue Jays vest, acquitted herself admirably with her trip-hop inspired material, electronic duo AlunaGeorge had a tougher go of it. Singer Aluna Francis, wearing a red getup that included lots of fringe, played largely to indifference, eventually winning over the crowd with her personality more than performance and the electronic-driven music, since she relied a little too heavily on backing tracks for her vocals.

But one assumes that both performers were schooled on what it takes to reach the pinnacle of their craft by Coldplay’s fun-packed 24-song set, which included a gallant singalong of their Chainsmokers collaboration, “Something Just Like This.”

For many fans, to paraphrase a Coldplay song, it was the “Adventure of a Lifetime.”

Be the first to comment on "Coldplay makes magic happen at Rogers Centre: review"