Country music star Brad Paisley showed he is a consummate entertainer with a two-hour set at Molson Amphitheatre Friday that hit all the right notes.

Concertgoers at the Brad Paisley show screamed when Carrie Underwood took to the stage at the Molson Amphitheatre on Friday night to perform their hit duet rendition of “Remind Me,” even though she really wasn’t there. 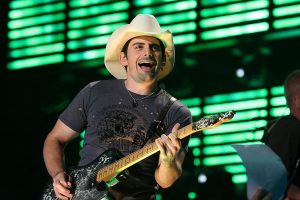 It certainly seemed that she was, but thanks to some amazing visual trickery — it was either a 3D video or perhaps, going back to deceased rapper Tupac Shakur’s legendary appearance at last year’s Coachella, a hologram — Underwood was able to perform her part of the intense country ballad and thrill the 16,000 or so who had come to see one of contemporary country music’s best and most lively showmen.

This certainly wasn’t your Mom and Pop’s country concert, except that it was: in the genre’s golden days B.G. (before Garth) and Country Music Television, performers, with rare exception, pretty much stood on stage and recited their songs, relying on the strength of their material and their own charisma to satisfy the masses.

But technology has come so far in the last decade alone that performers now have a myriad of visual and audio stimulating bells and whistles at their disposal, from massive video screens and laser lighting rigs to wireless microphones that give them the freedom to wander out into the audience and mix with the hoi polloi.

Brad Paisley did all of this and more during his nearly two-hour outdoor spectacle, but to his credit and skills as a consummate entertainer, his kitchen-sink approach never descended into the kitschy pretentiousness of desperation one might be tempted to rely on given the number of toys available to play with.

However, a healthy respect for tradition is at the core of the 40-year-old West Virginia native’s music and vision, and if you were a newcomer unfamiliar with such slices of celebratory patriotism to healthy American values and homemade apple pie as “American Saturday Night” and “This Is Country Music,” then your eyeballs were repeatedly slapped with it by cameo video shots of such past and present country culture icons as Andy Griffith, Hank Williams Jr., Jeff Foxworthy, NASCAR champion Jeff Gordon, Conway Twitty, Charlie Daniels, Reba McEntire, Keith Urban, and the late Possum himself, George Jones.

As for Paisley, he hit all the right notes. A cliché-free songwriter who tends to embrace the philosophical with a healthy bit of twang, he expressed well-worn sentiments like homesickness (“Southern Comfort Zone”) and romance (“She’s Everything”) that are free from superficiality.

Then there’s his sense of humour. It shows up in the clever lyrics of “I’m Gonna Miss Her” and “Online,” but the height of his self-deprecation came during the cheeky “Celebrity” (Goat Edition), whose accompanying video featured a larger-than-life costumed Paisley committing every scandalously tabloid-trashy act under the sun, intermixed with hilarious references to Psy’s “Gangnam Style” and the well-timed injection of a bleating goat.

A master guitarist, he shredded through Van Halen’s “Hot for Teacher” at a million miles per hour, his six-piece band keeping pace with his frenzied fingers. So confident was he on the axe that he’d be slapping audience members’ hands in the middle of some of his guitar solos, while strutting around a semicircular ramp that jutted out into the front section of the audience.

In the same spot, he began playing “This Is Country Music” on an acoustic guitar, handed it to a three-or-four-year-old girl perched on her father’s shoulders as a keepsake, continued on with electric guitar and ended the song with a George Jones screen tribute that read, “You were country music George. We’re going to miss you.”

For those in the lawns, he came out and performed a three-song set on a mini-stage just for them. He inserted a Canadian flag into the backdrop video for “American Saturday Night,” and brought out openers Chris Young and Lee Brice to join him, mentioned how great it was to be back in the land of “Tim Hortons” and “Cuban cigars,” and humbly thanked folks for “spending your hard-earned money” to come to the show. There was even a light-show app that made people’s phone screen change colours as Paisley performed near the end of the show.

He also steered away from the controversy of “Accidental Racist,” preferring instead to focus on good-time hits like “Old Alabama,” “Water,” and other memories from a nine-album deep catalogue.

Like I said, the whole kitchen sink and more: But leave it to Brad Paisley to show ’em how to do it with class and style.

Be the first to comment on "Brad Paisley show: Review"