If at first you don’t succeed, try a pseudonym. That’s what Wisconsin native Holly Brook Hafermann did in 2010 when she emerged as Skylar Grey and garnered two GRAMMY nominations, including Song Of The Year for co-writing Eminem and Rihanna‘s 2010 smash “Love The Way You Lie.” She subsequently earned another three nominations in 2011, including Album Of The Year for appearing on Rihanna’s Loud. But Grey’s career path hasn’t been a straight line. 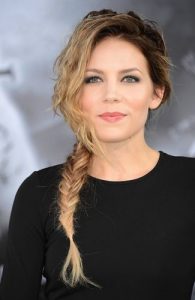 In 2004 she signed a deal as Holly Brook with Machine Shop Recordings, co-owned by Mike Shinoda and Brad Delson of Linkin Park, and subsequently toured with GRAMMY winner Duncan Sheik in 2009. She also opened for k.d. lang, Teddy Geiger and Jamie Cullum, among others, but decided things weren’t working out professionally and withdrew from the music industry to figure her life out.

Released on July 9, Don’t Look Down is Skylar Grey’s debut album under her current moniker. In an exclusive interview with GRAMMY.com, Grey discussed her new album, the necessity of reinvention, exploring different genres of music, and what it was like performing with Dr. Dre and Eminem at the 53rd GRAMMY Awards in 2011.

What led to your rebirth as Skylar Grey?
I started singing and performing when I was 6 with my Mom in a folk duo, and I pretty much always knew what I wanted to do with my life. I moved out to L.A. when I was 17, dropped out of high school, and pursued a career in music. However, the first time around it didn’t work and I learned a lot of really hard lessons. I didn’t have any knowledge of the music industry when I first got to L.A., and I really didn’t know on a creative level what I wanted to sound like, so I had to do a lot of experimenting. It led to a spiral of depression and being broke. So I actually left L.A. and moved to a cabin in the woods in Oregon for awhile, and went through a transformation. I was out there in the woods by myself teaching myself how to survive and just proving to myself that I was capable of living in this world on my own instead of having to rely on so many others. It was really empowering. When I came back, it was because I wrote “Love The Way You Lie.” That song brought me back into the music industry, but this time I had a lot more confidence and knowledge. I was given a second chance, and I feel really lucky.

How did you get “Love The Way You Lie” to Eminem?
I was still in a publishing deal [with Universal Music Publishing] — even though I was in a cabin in the woods — so I contacted my publisher. I said, “I spent a lot of time out here thinking by myself, isolated. And I’ve decided I need to find a way to make a living in music, because I’m not good at anything else.” I told [them] my vision, and [they] hooked me up with [producer] Alex Da Kid, whom they had just signed because [they] thought we’d have good chemistry. I met him over email and the first thing we did together was “Love The Way You Lie.” And he was the one who had the connection to Eminem and everybody.

When did you get your album deal?
I came out of the woods after “Love The Way You Lie” happened and I got to work with Dr. Dre, T.I., Lupe Fiasco, [and] Diddy — and all these amazing people came to me asking for songs. I also got to perform on the [53rd] GRAMMYs with Dr. Dre and Eminem. Because I knew a lot more about record deals at this point in my life, I held out for the right deal. I didn’t actually sign the deal until after the GRAMMY performance.

What do you remember about performing “I Need A Doctor” at the GRAMMY Awards with Dr. Dre and Eminem?
It was nerve-wracking and incredible, really surreal to be up onstage with two legends. I really couldn’t believe that it was me.

Your new album covers quite a wide pop range. How did you become so versatile?
I think it just comes from my background [in] music. My mom was a folk singer and Celtic harpist. My dad was in a barbershop quartet and my great grandma was an opera singer. As I grew up, I discovered pop music and Top 40 radio, but it was in the ’90s, so music was very different then — it was really lyrical. I listen to SiriusXM satellite radio and Lithium, the station, because it’s all like the ’90s grunge stuff, which is my [favorite]. I met Shirley Manson and Butch Vig [of Garbage] this past year and, I don’t know, maybe something will happen there. I would love to work with them.

When did you discover hip-hop?
The first time I had any interest in it was when I bought Eminem’s Marshall Mathers LP in the ’90s. When I heard “Stan” I thought, “I could do something like that at some point — collaborate with a rapper.” There are a lot of rap fans who don’t necessarily like other types of music, and vice versa, so I was thinking, if you can combine two totally different genres, maybe you’d be able to convert some people. That was my vision. I’ve always been jealous of rappers, because they can fit so many words into a song and tell a story with lots of details. But when you’re a songwriter, you have to fit the words to the melody and you can’t fit as much in. I’m just a big fan of storytelling.

When you were planning to record Don’t Look Down did you have a choice whether to make it hip-hop or pop?
I always wanted to have mainly mid-tempo hip-hop beats, but the way that I treat them, it ends up not being hip-hop. [It’s] kind of my own genre, I guess.

Is this how you envisioned your return?
Yeah, it is. I found I just learned what to do and what not to do the first time around and I’m making sure that it doesn’t fail again. It seems to be working.

What advice would you give to artists who find themselves in a similar career circumstance?
I would say that being yourself is the most interesting thing you can be, so stay true to who you are. It’s really hard, but if you do that and you stick with it, and you have patience and you actually have the goods, then I really believe it’s only a matter of time before the stars will align.

(Nick Krewen is a Toronto-based journalist and co-author of Music From Far And Wide:Celebrating 40 Years Of The Juno Awards, as well as a contributor to The Routledge Film Music Sourcebook. He has written for The Toronto Star, TV Guide, Billboard, Country Music and was a consultant for the National Film Board’s music industry documentary Dream Machine.)