Nick Krewen
Special to the Star,
Published on Tue Nov 23 2010

The teen pop phenom freight train known as Justin Bieber barrelled over a sold-out Air Canada Centre audience for the second time in three months Tuesday night, with a dazzling 90-minute tease-and-please spectacle designed to activate that dormant female gene that only comes alive during concerts that display unrequited puppy love: the scream. 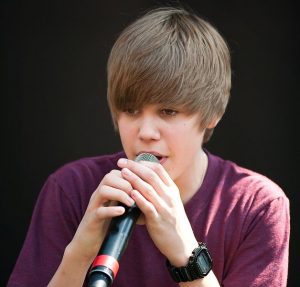 And lord, did the estrogen-dominant crowd of approximately 15,000 ever raise the rafters when their pint-size hero appeared, although the affection exchanged between performer and parishioners was always rather innocent in its exchange.

But you gotta hand it to the Bieb: With the manipulative precision of a trained seal, his spot-on choreography — consisting of a lot of side-stepping in his high-tops and the requisite hand above the waist (perhaps a bit of an homage to his hero Michael Jackson) — never ceased to impress.

Although some may have questioned the wisdom of the Artist of the Year American Music Award being bestowed upon him just 48 hours earlier, the London, Ont.-born, Stratford-raised singer showed that he merited the consideration just based on his dance chops alone.

He kicked into Usher mode almost immediately: dressed head-to-toe in white, sunglasses obscuring his puppy dog eyes, Bieber breezed through the first handful of numbers fluidly with his four backing dancers as if he had been born to soft shoe.

His voice, thin as it is despite his R&B inflections, also cut through the showbiz razzle dazzle — and apart from a couple of questionable Memorex moments during “Somebody To Love” and “One Less Lonely Girl,” he seemed to be singing live without any technical assistance (unlike opening act Sean Kingston, who didn’t bother to hide the fact that most of his singing was staged).

Bieber used his time onstage to demonstrate a number of talents: he spent some time during a medley of Michael Jackson’s “Wanna Be Startin’ Something” and Aerosmith’s “Walk This Way” to pound away at the drums, and later tickled the ivories for the profoundly dramatic “That Should Be Me” for the evening’s most schmaltzy moment.

He even spent some time off the stage showing off his acoustic guitar chops, hovering on a heart-shaped chair high above the audience as he serenaded the crowd with “Favorite Girl,” melting thousands of pre-pubescent hearts in the process.

While the execution was generally excellent, the show wasn’t faultless in that it offered many moments that were obvious, contrived and convenient. When it came to delivering his between-song banter, the singer turned into Robo-Bieber, spewing his script with all the passion of a walnut.

His first line of “Welcome to My World” was followed by the standard “All the girls here look beautiful tonight” and the typical “You are the best fans in the world” spiel that was repeated often to generate the requisite screaming faction. 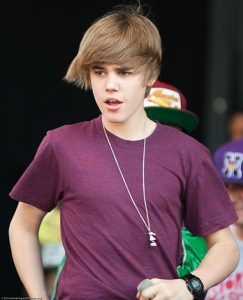 And, curiously enough, Bieber seemed completely satisfied with performing rather than reacting; there wasn’t a modicum of spontaneous emotion displayed during the entire production, even when family and friends surprised him with a cake to celebrate his four AMA Awards. We never did get to see the human Justin, just the performing automaton — perhaps another lesson he gleaned from the late, great MJ.

At times, a more important message overshadowed the music: product placement. Tour underwriter XBox kicked off the show with what was generally a two-minute commercial for one of its products, and even elements of the stage set incorporated a game design that was a little too overt for comfort. Even the shameless plug of showing the actual trailer for Never Say Never, the new 3-D Bieber movie out in theatres in February, was a bit much for people who had shelled out a face value of $75 a ticket to see their favourite performer in action.

That Bieber put on an entertaining show that thrilled his fans is not being questioned. Connecting with them, however, is still very much a work in progress.