Messy-haired ukulele (“a joke at first,” he says) leads the indie-folk band Beirut.

Is brass making a comeback?

Beirut’s Zach Condon certainly thinks so. At the very least, the Santa Fe band’s lead singer, songwriter and trumpet player is doing his part to lead the charge, as his traveling sextet offers a gypsy-scented European sound rife with trumpets, trombones — and when the occasion calls for it — euphonium and tuba. 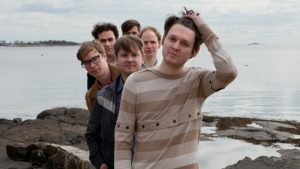 “It’s coming back with a vengeance,” stated Condon from upstate New York following a series of dates that ended in Dusseldorf, Germany.
“I’ve talked to studio session trumpet players and they’re basically telling me, ‘I’ve been getting more work than I’ve gotten over the last decade, in the last four years.’ ”

Condon, a native of Albuquerque who leads his guitar-free sextet that includes accordionist and pianist Perrin Cloutier, drummer Nick Petree, electric and upright bass player Paul Collins, trumpeter and euphonium player Kelly Pratt and trombonist/tuba player Ben Lanz to the Sound Academy Thursday night, feels the reversion of pop and rock music back to embracing brass accompaniment — something very popular in the late ’60s era with bands like Blood, Sweat & Tears, Lighthouse and Chicago — is a natural evolution.

“That was the way, back in the day, of amplifying melodies and ideas without having any actual amplification,” Condon surmises, “It’s pre push-a-button-and-the-idea-sounds-like-some-wild-space-ride” as a way of amplifying a very specific melody or emotion. Obviously since then it’s gotten a lot easier to do it in different ways.

“There’s nothing wrong with that — it’s just the way human interest is constantly changing.”

In Condon’s case, the Beirut albums and EPs issued since 2006 — Gulag Orkestar, Lon Gisland, The Flying Club Cup and last year’s The Rip Tide, each featuring an accordion/brass undercurrent that gives their music a majestic East European bistro flair — emanates from him being “contrary.”

“When I started it out, obviously my friends are into these punk and hardcore bands and whatnot and I’m picking up brass and accordion, and I think I took a certain glee in that. But I never wanted a transference into pure novelty, so I had to take it pretty seriously.” 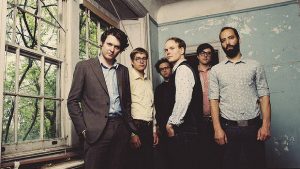 The same goes for the Condon musical staple, the ukulele; another stringed instrument that seems to be enjoying a revival in popularity, particularly with folk musicians.

“Sometimes I want to filter out all the bulls–t and say that it’s just portable,” laughs Condon, whose distinctive tenor warble conjures up comparisons to David Byrne and Rufus Wainwright.

“I fell in love with the damn thing. I don’t know — obviously it’s charming. I picked it up as a joke at first — I thought it would be a funny stage prop or something, but then I just dug my heels in. I don’t know how that happened. I don’t remember any moment of epiphany. But it does have that tone and there’s just no mistaking it, really.
“But I’ll be honest, walking around Williamsburg with the ukulele case these days can be a little bit embarrassing.”

Condon wasn’t always transfixed with the Beirut sound: when he was a teenager, he started the project called Realpeople and recorded electronic music in his bedroom.

“Then one day, my grandmother sent me her accordion and all of a sudden the entire idea just completely shifted. Within a couple of months I had gone completely acoustic, and was just absolutely in love with the fact that I could get these organic, European sounds out of these instruments.

“When I was 16, I didn’t know these other instruments existed.”

Be the first to comment on "Beirut: Down to brass attacks"