Few thought this night would ever happen.

With a steady string of lawsuits, in-fighting and the fact that Brian Wilson only returned to the stage a few years ago due to his own personal demons, the notion of any full-fledged reunion of the surviving original Beach Boys was fantasy as best.

Yet fantasy became reality last night at the Molson Amphitheatre, as the Californian ambassadors of surf, summer and sexy girls put aside their differences to deliver a marathon two-and-a-half hour show and celebrate 50 years of great pop songs and ebullient harmonies.

Brian Wilson — celebrating his 70th birthday; his cousin Mike Love, 71; Al Jardine and Bruce Johnstone, 69 apiece; and David Marks, the 64-year-old youngster of the group, magically turned back the hands of time and started summer early for a celebratory crowd of 15,000. 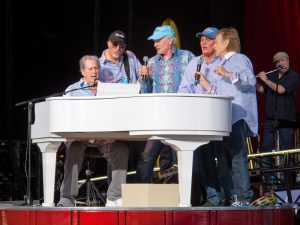 Whether this is a one-time tour or if we’re ever going to be graced with their presence again remains unknown, but the Beach Boys managed to be everything to everyone and then some.
They trotted out the hits: the golden ones — “Catch A Wave,” “Surfin’ Safari,” “I Get Around,” “Sloop John B,” “Good Vibrations,” “California Girls” and “Help Me Rhonda” among them; the more recent ones — “Getcha Back,” “Rock ‘N’ Roll Music,” “Kokomo”; some other faves (Frankie Lymon‘s “Why Do Fools Fall In Love”, and — I kid you not — Lead Belly‘s “Cotton Field”) and even a few songs from their respectable new album That’s Why God Made The Radio — and managed to sound as though they had sipped from the fountain of youth and postponed the inevitable aging process.

Of course, they couldn’t quite do it on their own: they had a band of seven musicians ranging from a few additional guitarists (they were five or six of them on stage at different times), a drummer and percussionist, a woodwind player and a couple of keyboardists, many from Wilson’s own touring band who have mastered Beach Boy harmonies and were excellent at creating illusions.

It was literally 48 songs celebrating 50 years, and they even dipped to some more obscure numbers from their numerous albums to satisfy the hardcore in the audience.

Of course, being around a half-century allowed Mike Love to play the role of comedian, pulling out obvious groaner “age jokes.” 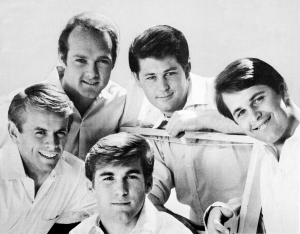 Six songs in, following a particularly spritely version of “Surfin’ Safari,” Love joked that it was “time for intermission followed by a nap.”

Overall, it turns out The Beach Boys are not only made for these times, but the past and future as well. May their endless summers remain eternal.